Over the weekend, I realized that I’ve been posting mostly about kitchen topics.  It’s not that I have given up crafting.  It’s just that the things I have been doing are all rather in that limbo state–you know, the one in which you work for hours and hours and yet the thing doesn’t seem to change.  For example, I made it past the highly interesting and entertaining (albeit a little anxiety inducing) colorwork part of my sweater. 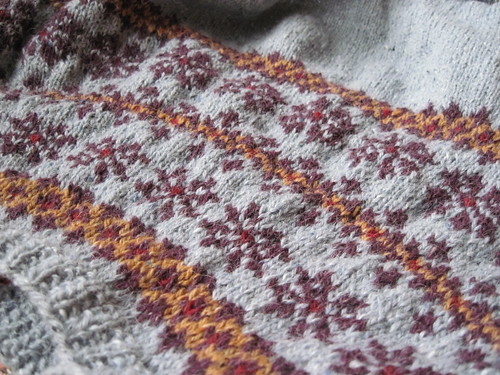 That yoke seemed to fly by, even as I was increasing the stitch count to over 400.  Then, I divided for the bottom part where it is just 13 inches of straight knitting in one color, and progress seems to crawl by now.  Even though I can knit this part with my eyes closed, in the dark, or even upside down (actually, I haven’t tried this, but it might make the project more interesting), I do not seem to have made much more than a few inches progress over the course of the last few weeks.  To put this in perspective, it only took me a week and a half to do the colorwork yoke.  And now three weeks have passed and I only have 4 inches of the body.

Of course, this could have to do with the fact that once I finished that fascinating yoke, I immediately craved more fair isle.  It’s like an addiction, fair isle.  There is a mesmerizing quality to watching your knitting come alive with color.  Plus, once you start knitting with two hands and multiple balls of yarn, it’s hard to get up from your chair.  You become a kind of fair isle prisoner-captivated with your mind by the color and restrained physically by all the balls of yarn in your lap and the fear that if you get up, you’ll lose your place and have to rip back-horror!

But really, how can you say no to such a project as this? 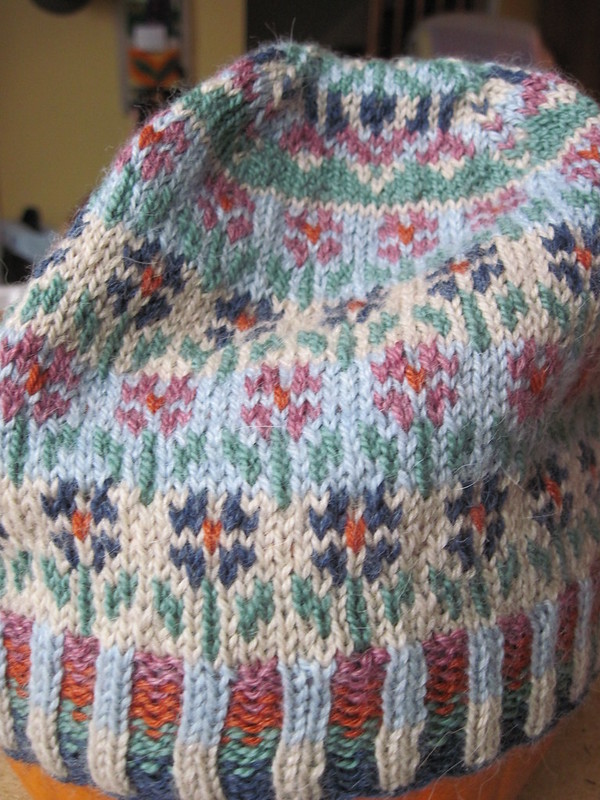 It is the pretty Peerie Flooers hat from Kate Davies and I just love it.   It’s a great pattern for using up leftover bits of sock yarn, though that might limit your color choices.  Also, in case you didn’t notice, a pumpkin makes an excellent approximation of a head for blocking a hat.  I tried taking photos of myself wearing the hat, but the camera kept getting in the way.  Here it is all flat. 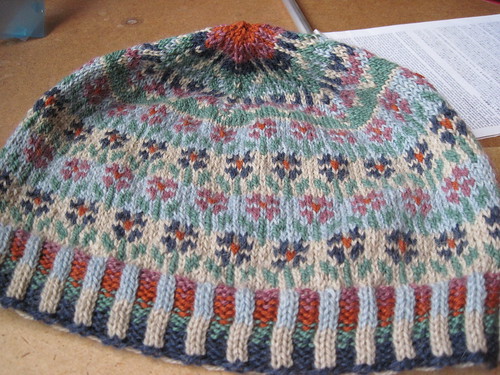 I think my fair isle could be more even, but overall, I am very happy with it.  Next, I think I might make the matching mittens.

The other day, the husband told me he wouldn’t say no to a fair isle sweater.  How is a knitter supposed to respond to this statement? Part of me got all excited and I actually started to go through all my yarn to see what I had that would be appropriately manly.  Then, I began to think of the scope of the project–a 44 inch fair isle sweater that was not for me.  hmmm…what’s a knitter to do?