My first knowledge of Turkish Delight came from C.S. Lewis’ book, The Lion, the Witch, and the Wardrobe, when it is used by a wicked witch to tempt one of the main characters. Having never heard of the candy before, I naturally wondered what it was. It must be really good to tempt a child to go with someone so clearly wicked. Sadly, Turkish Delight is almost impossible to find int his country. The husband and I were finally able to try it when we visited London five years ago. Here, we have only been able to find it at Russ and Daughters in New York.

If you have never had the candy, it is really hard to describe. It’s super sweet, made even sweeter by a coating of powdered sugar and cornstarch. The texture is like one of those citrus jelly candies, but softer, and it often has nuts suspended in it. Most are scented with rose water and tinted different pastel colors. 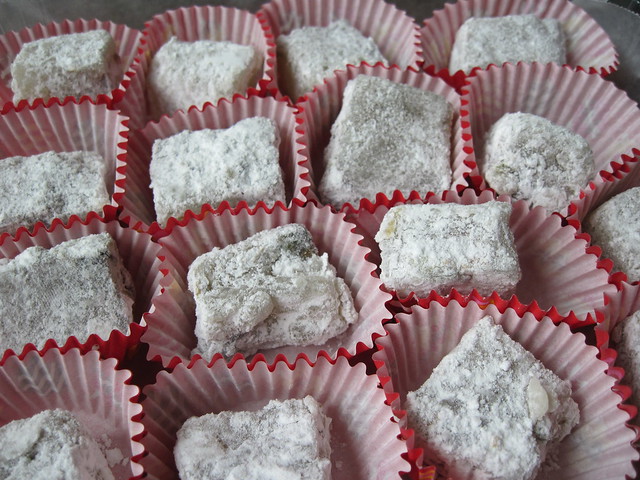 I almost did not make this candy because every recipe I looked at involved constant stirring for at least 30 minutes and some up to an hour. Now, I like to cook and all, but I am not much for standing over a stove for an hour. However, I kept thinking about Narnia and how it was always winter there and never Christmas and I knew I would wonder about it until I made it. When I found this recipe, which has all metric weights for the ingredients, I knew I had found the right recipe to try.

There are two stages to making this candy. First, you have to boil a honey and sugar syrup to a certain temperature 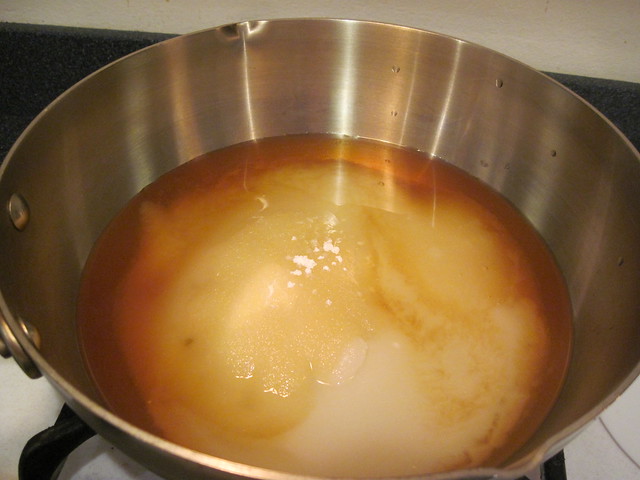 while simultaneously boiling a cornstarch mixture. 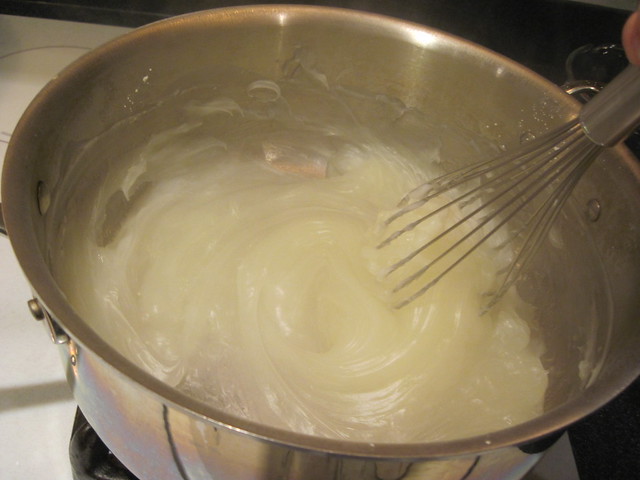 After the sugar syrup is ready, you combine the two together. This was the hardest part, especially since the boys were out and I had no extra hands to help me. I’m afraid I wasn’t wholly successful in combining the two well enough because the mixture looked grainy to me. 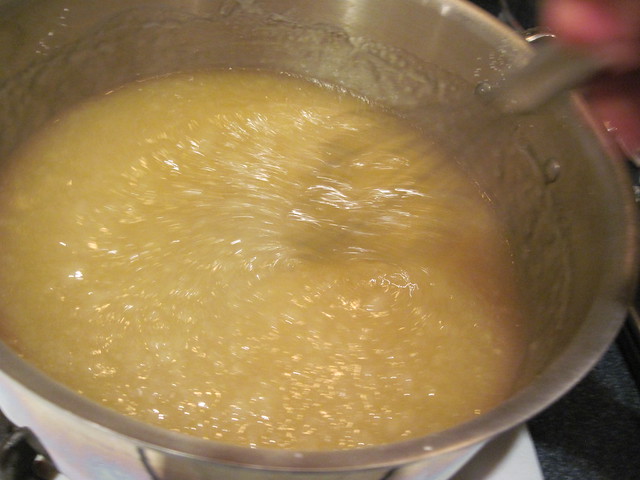 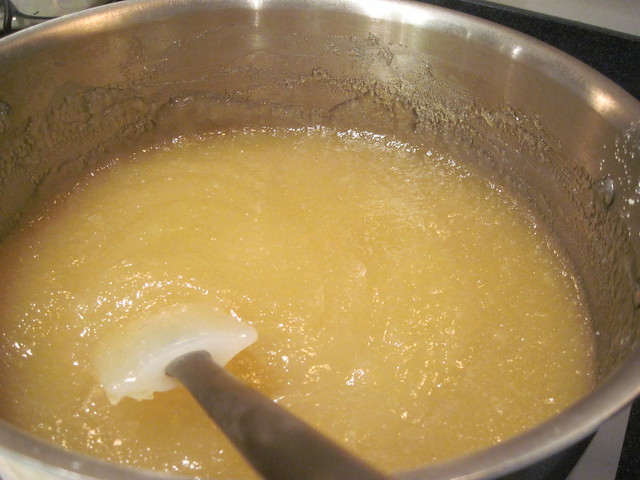 Basically, I stirred until my spatula head kept getting stuck in the candy and coming off. And then I stirred a few minutes more until I literally could not move the mixture around in the pot any more. Then, I had to stir in the nuts and orange flower water. 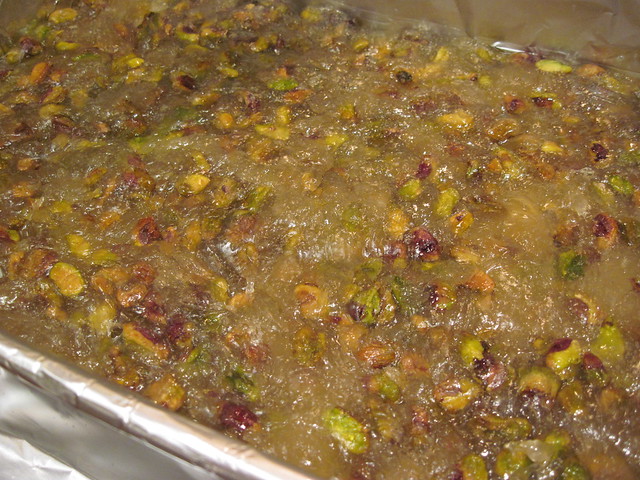 I did the best I could to spread it into the pan in an even layer, which was no small feat as it was very sticky and thick. A greased spatula helped with this job and then I covered it and let it sit for a day to set. Once it was cut up, it got rolled around in powdered sugar and cornstarch so they would not stick together. 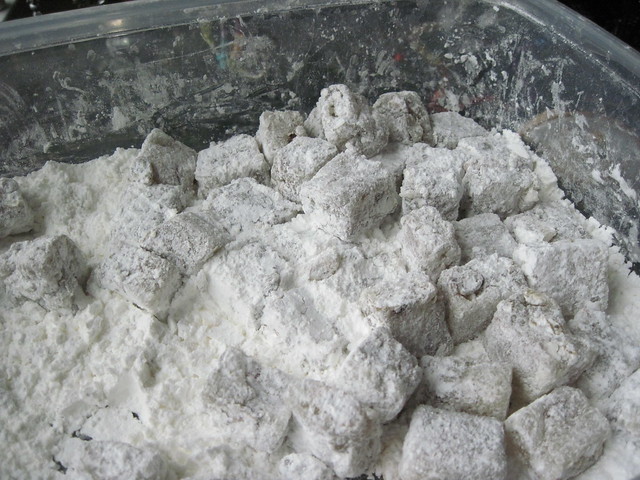 Well, how was it, you ask? It was pretty good. We all liked the candy base and stood around the pot right after it was made, scraping up the bits left and eating them. The honey flavor really shines through and the texture seemed right. However, I did make one mistake with the recipe. I used salted pistachios instead of unsalted because that is what I had on hand. The final candy is a bit weird with the sweet gel and the salty nuts. It’s not bad, just not quite right if you have had the real stuff. 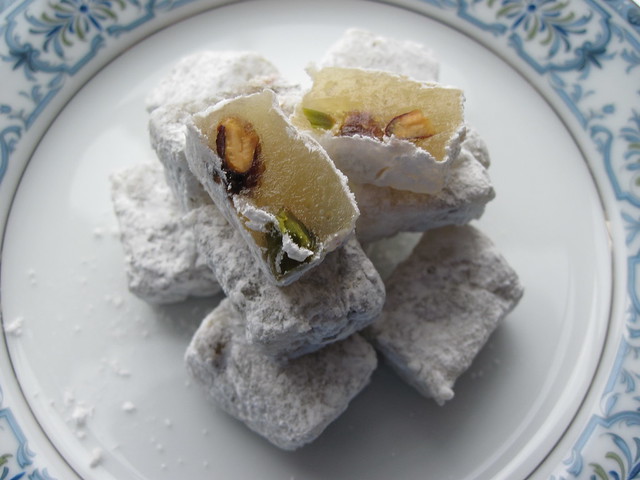 Also, the texture is not as smooth as it should be, but for a first try, I am actually pretty happy with it. This was the most difficult candy to make so far and the fact that it is edible makes me pretty happy. I’m not sure if it would tempt any kids into following the White Witch, but that’s just as well since Christmas is well on its way in this house! 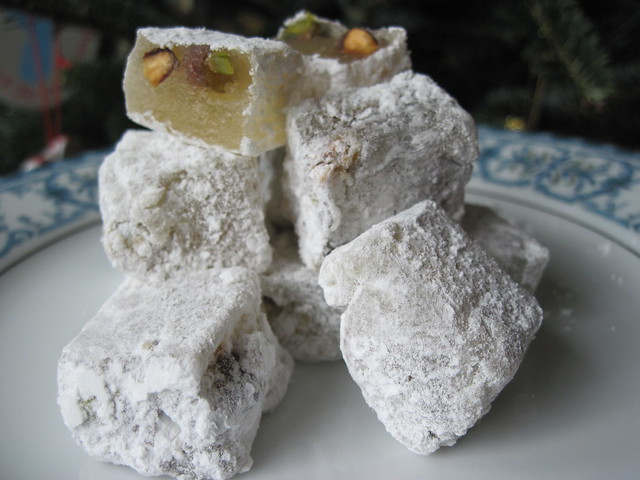 Now, I want to read the Narnia books again. We’ve been listening to Charles Dickens’ story, A Cricket on the Hearth. What is your favorite Christmas story?