When I started this 12 days of candy, I knew that Torrone was going to be the last one on the list. It’s one of the husband’s favorite candy and it is also one of the most challenging candies to make. Fortunately, I had two really precise recipes that I was hopeful would lead me to success. Unfortunately for me, I had to try both of them. 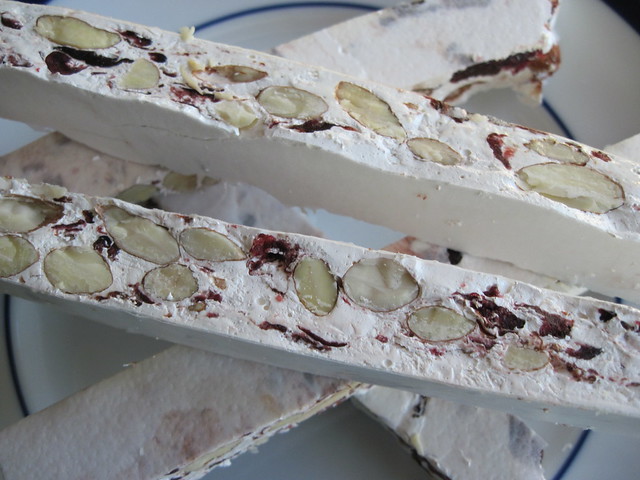 Torrone is an Italian candy made with whipped egg whites and sugar syrup, studded with whole nuts and sandwiched between layers of edible paper. Does this sound complicated yet? Yes, it is. The first recipe I tried, from the d.i.y. Cookbook, was a simplified version. It has you boil all the honey and sugar together to a very high temperature; 320 degrees! 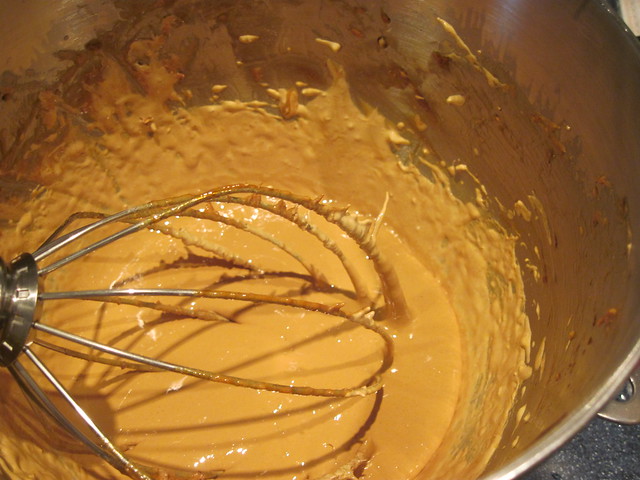 It’s really hard to boil honey to that temperature without scorching it and, sadly, that is what happened. The color was too dark and the resulting mixture actually tasted a little bitter. Plus, it deflated quite a bit. Not wanting to waste my expensive nuts and dried fruit in this batch, I decided to call that one a loss and turned to my second, more complicated recipe.

The next recipe was from The Bouchon Bakery by Thomas Keller. It had a lot more ingredients and more components to keep track of, so I enlisted the help of my support crew. They are not looking at the camera because they are watching their respective thermometers. 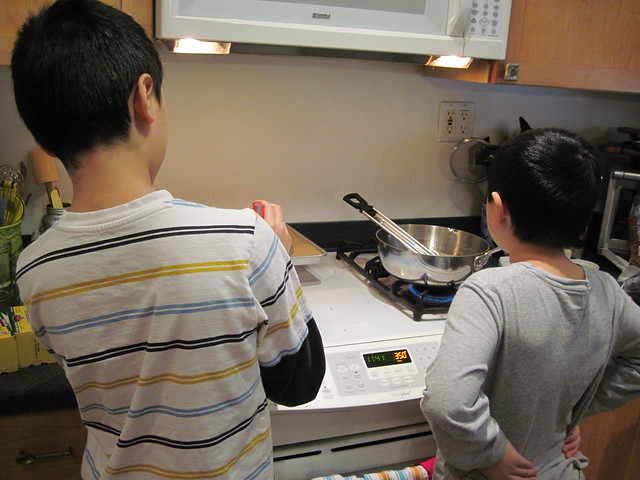 They kept track of hot boiling syrup temperatures on the stove, while I made sure the egg whites were done just right. Then, it was a matter of adding the syrups carefully. 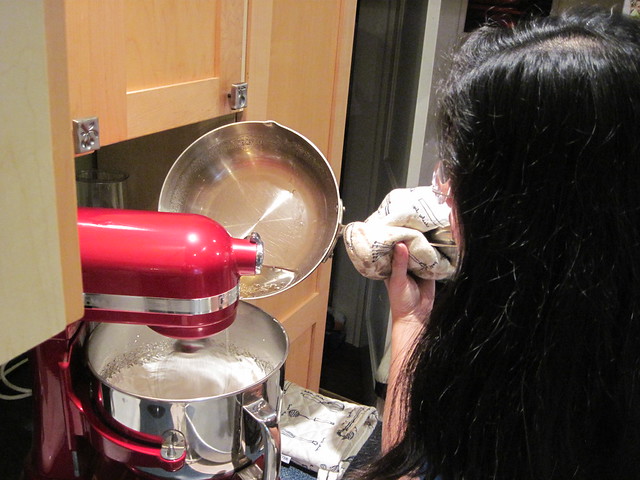 At first, everything seemed to be going well. But, after a few minutes of beating, I noticed that this mixture also deflated. Also, it stayed hot a very long time. We ended up getting a fan to help cool the bowl and the mixer as it whipped for over 20 minutes. Once I added the nuts and fruit though, everything seized up and things became more difficult. It was almost impossible to get the mixture out of the bowl, and flattened. There was no way it was going to be coaxed into a rectangular shape, so I had to content myself with just getting it an even thickness. Also, I had quite a patchwork of edible rice paper in the end because the sheets were not big enough and they kept tearing. 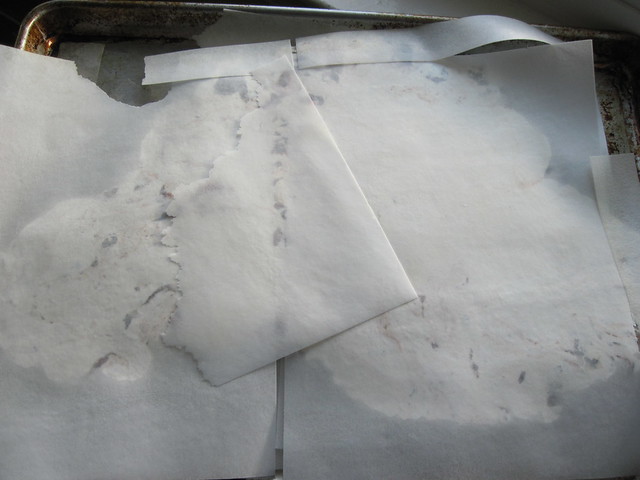 I knew this was going to be a tough one to cut, so I got the husband’s assistance with this part. It was indeed very hard to cut. 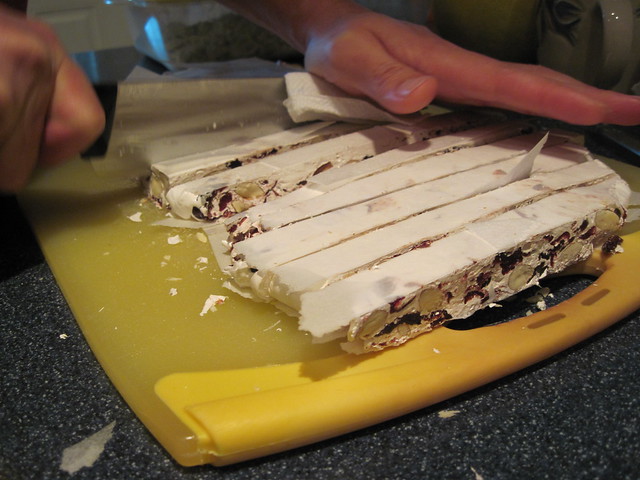 The final result, though, was just right. This may not be the softest torrone out there. In fact, torrones can vary greatly in hardness. Some are very soft and others quite hard. This version turned out to be a hard version. In retrospect, I should not have tried to cool the mixture down as much as I did because that made it harder to roll out in the end. 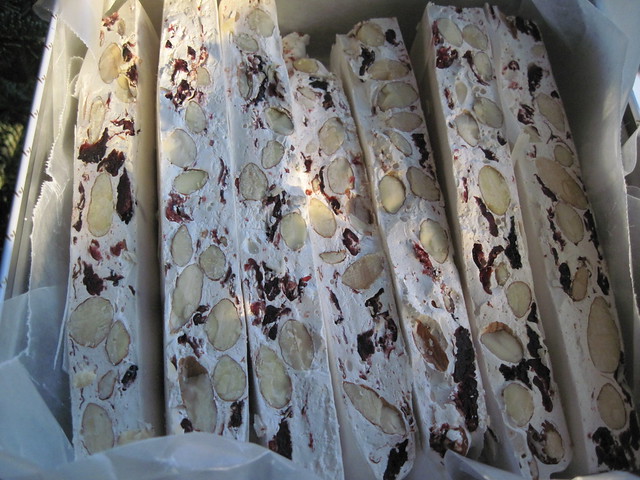 The color is great, a nice bright white. There are almonds and the dried cherries and cranberries give it a festive look. The flavor is spot on with lots of honey notes and crunchy almonds. The nougat becomes nice and soft and chewy in your mouth after a few minutes and you can chew it like gum, only it is tastier. It looks just like the photos in the book, too, which make me very happy. Even the little odd shaped bits look pretty good. 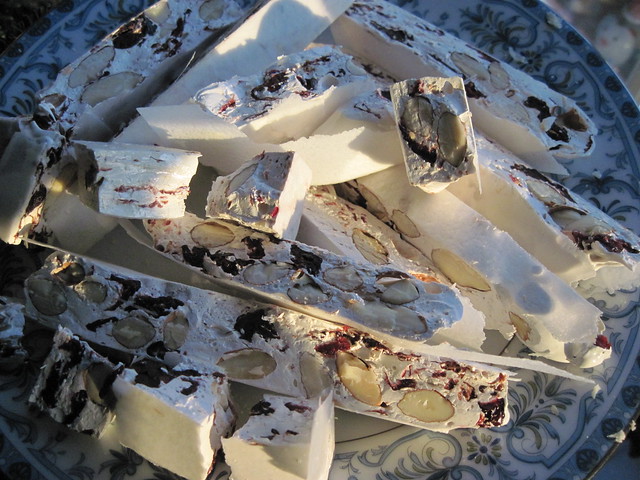 Well, that’s the end of my twelve days of Christmas candy treats. Today is your last chance to leave a comment and be entered in the drawing to win a box of goodies. I have all the items set aside and ready to be shipped on Monday. Mail service in our area has been slow, so it is very likely the winner will not receive the prize in time for Christmas, but maybe that means they can keep it for themselves! I will be back tomorrow afternoon to announce the winner.