A few months ago, King Arthur Flour began a rolling event that they call the Bakealong.  Every month, they release a recipe that they invite people to make and then post pictures on their blog or instagram.  It’s a way of building a sort of baking community and it’s good publicity for them as well.  For the most part, I have been playing along, though I don’t always follow the recipes strictly.  December’s recipe is for a butter pecan Kringle. 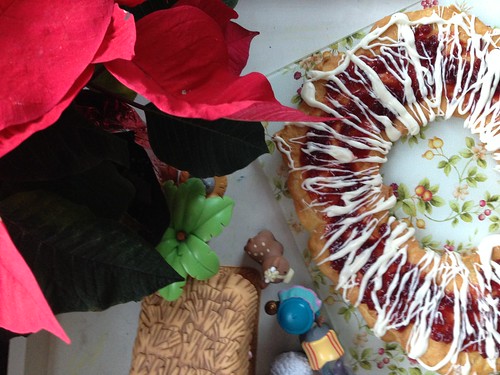 The first time I ever saw or heard of a Kringle was at Trader Joe’s a few years ago.  An employee was arranging a display of kringles that they had from a famous bakery in the midwest (Minnesota or Wisconsin, I can’t remember which) and she was singing its praises.  So, we bought one to try.  And we were underwhelmed.  Once we looked at the ingredient list, we began to understand why.  It was mostly made of margarine and corn syrup. 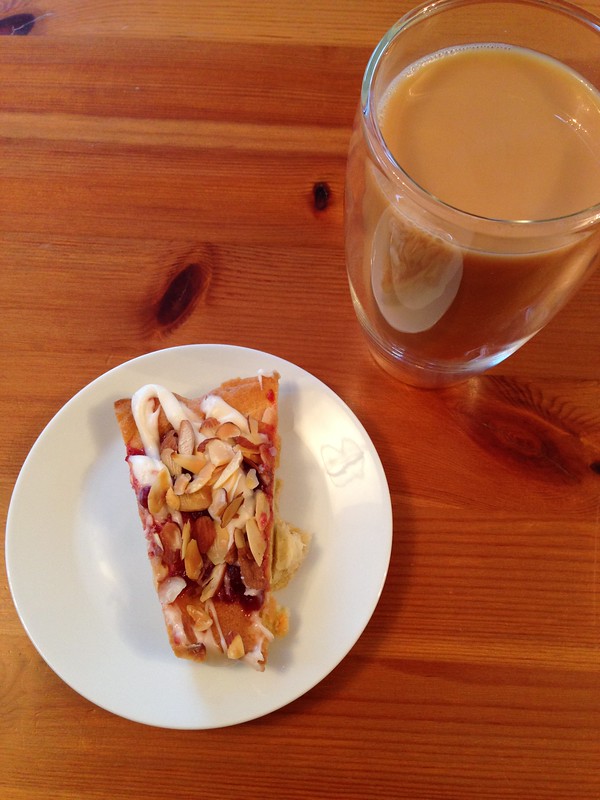 Since then, we have not tasted another kringle.  However, I have lately seen a few recipes popping up for this treat, one from America’s Test Kitchen, and now this one from King Arthur Flour.  Neither of these recipes had artificial ingredients, so I decided to give it another try. 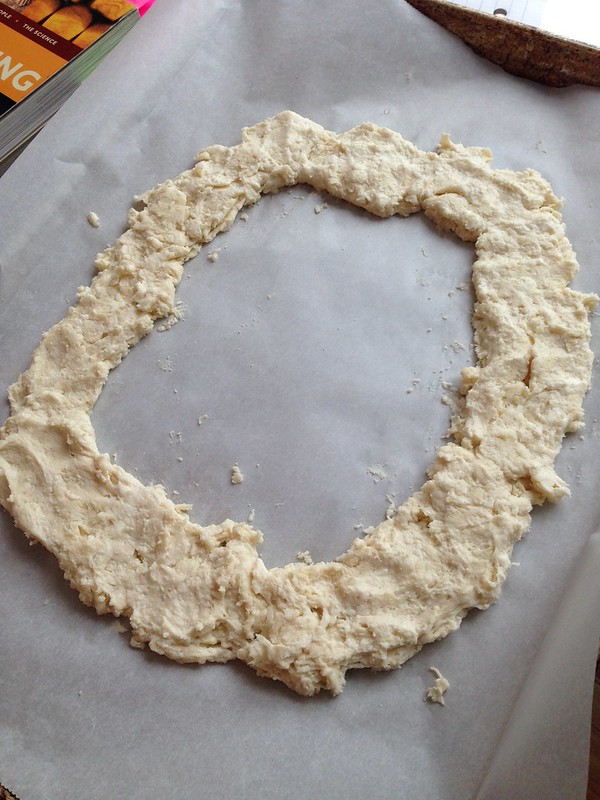 If you’ve never had a kringle, it’s basically a pastry made of two types of dough.  The first is a pie crust-like dough. 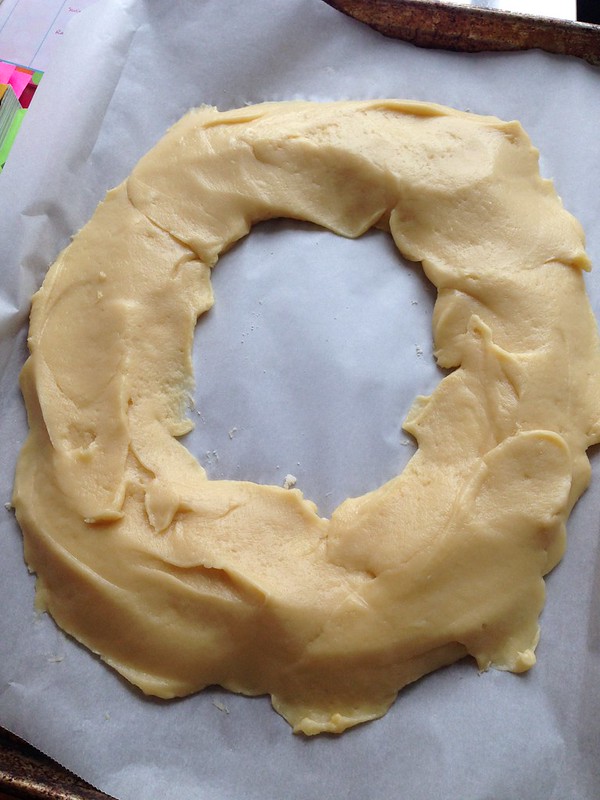 The second is a choux pastry or the dough that’s used for cream puffs and eclairs.  The choux paste is spread on top of the pie dough so that the pie dough is completely covered. 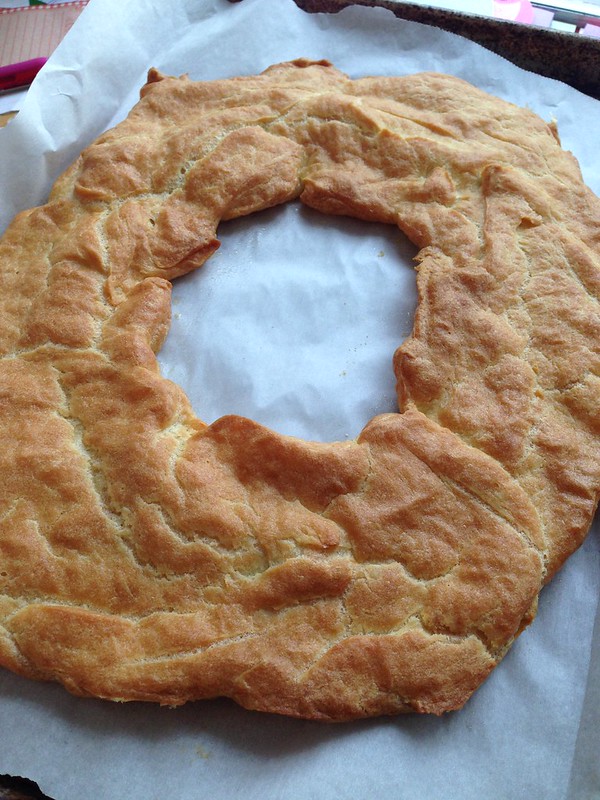 Then, it’s baked until everything is nice and golden brown.

After it cools, you can top the pastry with whatever you like.  The recipe I was using called for caramel and pecans, but I opted for using up some lingonberry jam that was languishing in the fridge and topped that with icing and sliced, toasted almonds. 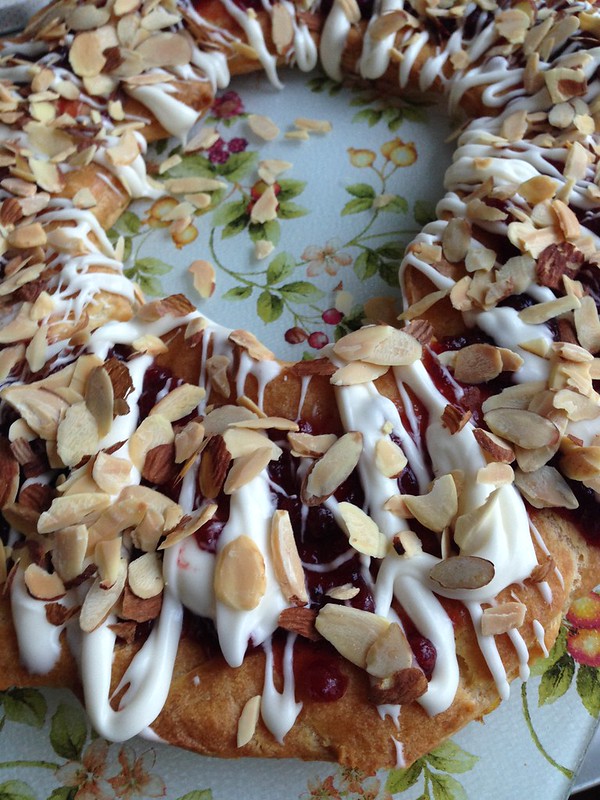 The resulting pastry is pretty to look at.  I love how festive it looks with the bright red jam. 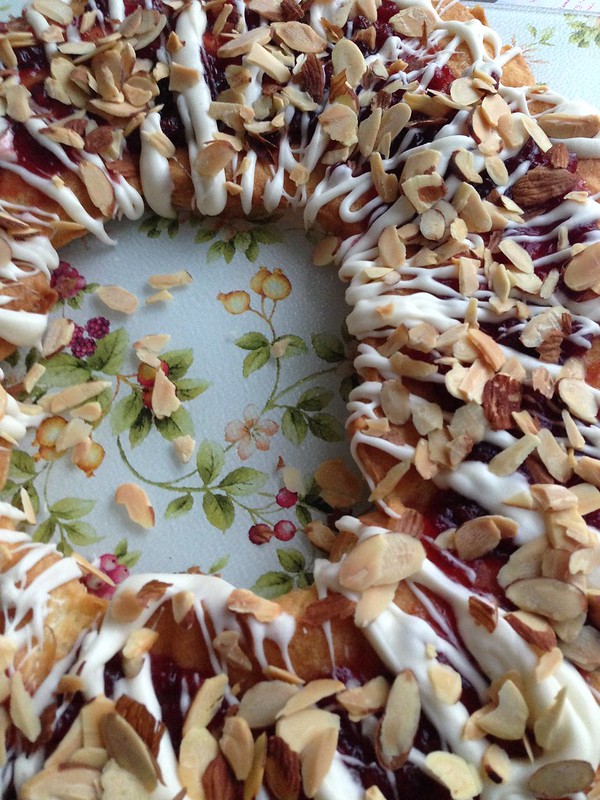 And we loved it!  It looks like a hard thing to make, but it actually doesn’t take that much work.  There’s no rolling pin involved, just a couple of bowls and a pot.  If I were a morning person, I could probably make this for breakfast, but alas, I am not. 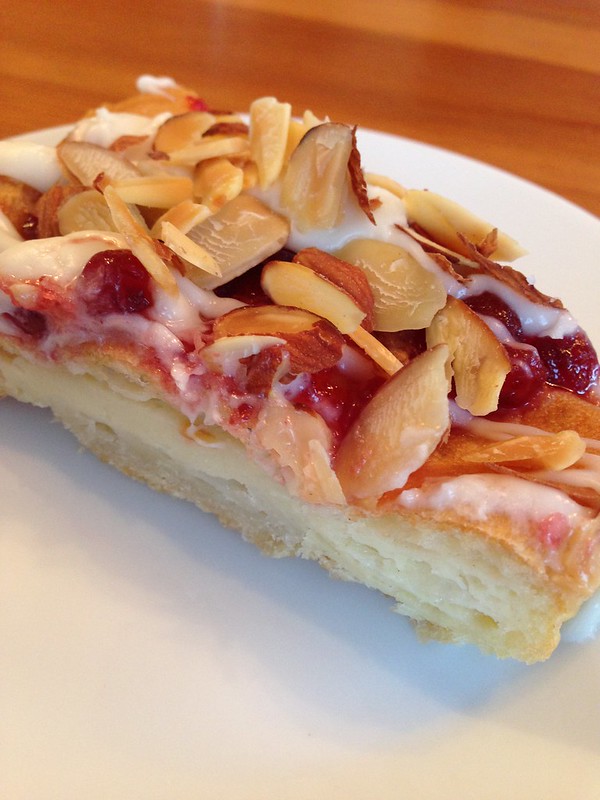 The pastry has lovely layers and is really great on its own or with a cup of tea or coffee.  It’s great for breakfast or dessert and I’ll definitely be making it again.

Here’s a link to the recipe from King Arthur Flour.

Yesterday’s comments were fun to read!  Of course, cookie cutters are not the only things I collect.  I also collect yarn and knitting bags and I have a fair number of cookbooks as well.  Keep the comments coming today to get another entry into my Box of Christmas treats giveaway.  Tell me what you like to have for breakfast on Christmas morning.