A couple of nights ago, I woke up in the middle of the night, and, in that semi slumber state when I was letting my mind wander while trying to go back to sleep, I thought of a solution to a puzzle that had been nagging me for a couple of weeks.  I love it when things like this happen.  It proves what I tell my kids all the time when they are working on something and having trouble with it: Go away and do something else.  Your brain will keep working on it even when you don’t think you are thinking about it.  This is especially true for creative endeavors like writing, but can also be true for more quantitative puzzles.  Our brains are amazing.

Now, the result of my midnight ponderings is this block for the June quilt of my do. good stitches group, aspire circle.  I wanted something really scrappy because my scrap bins have been filling up lately, but I did not just want to dig through my scraps for pieces that would “fit” in a pattern.  What I really wanted to do was use up were those little odd shaped triangle scraps and other little odd shaped scraps that are hard to fit anywhere else.  However, I didn’t want it to turn out to crazy looking, which is often what happens when you just throw a lot of scraps together.  I had been playing around with an idea to make heart blocks and, in the middle of the night, I hit upon an idea to marry the two ideas together. 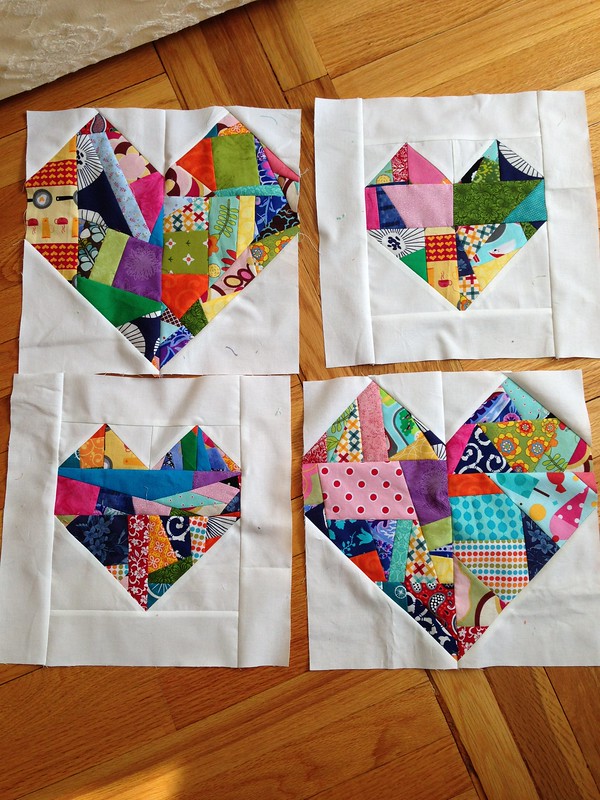 The heart portion of the block is pieced using an improvisational piecing method that I read about here.  I started off by piecing together a bunch of little odd shaped blocks. 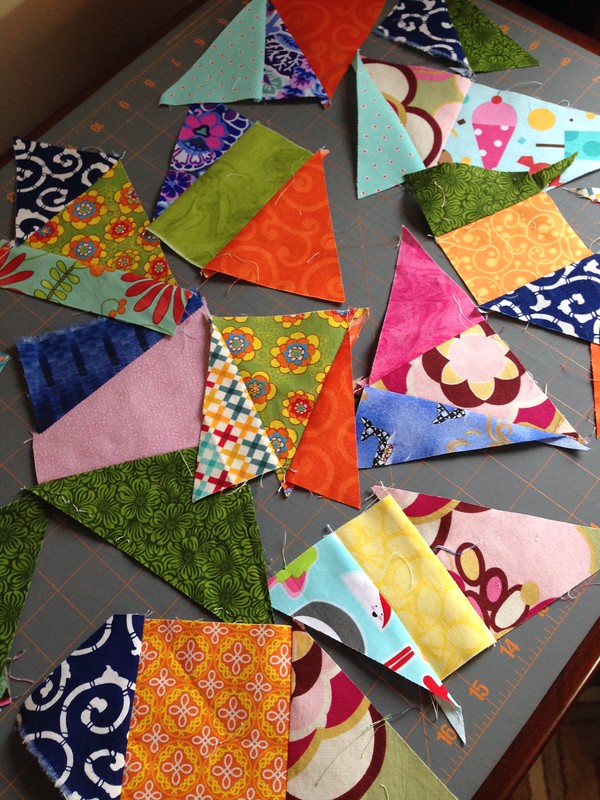 Generally speaking, I just tried to pick two pieces that had one side that were approximately the same length and then sewed those sides together.  Sometimes, I chose a few at a time like below, and sometimes I started with one piece and dug through my scrap bin until I found one that matched nicely. 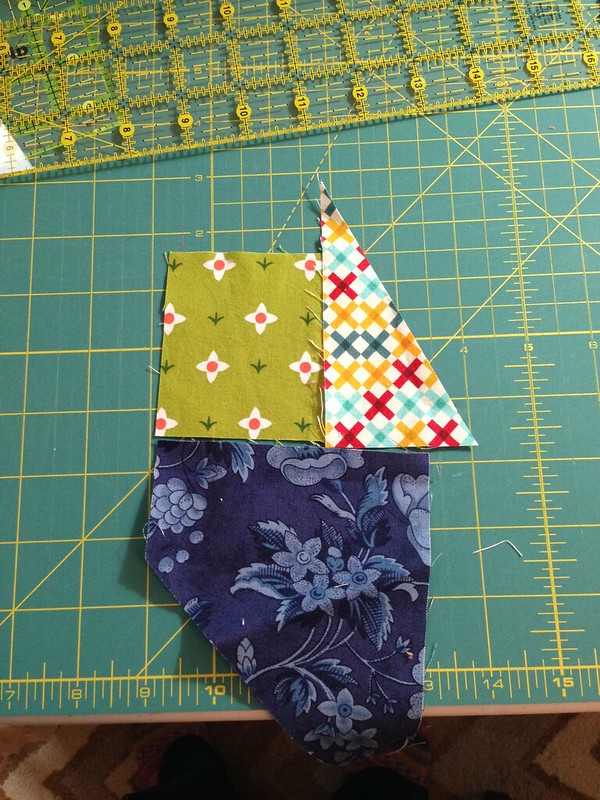 Once you have a bunch of little pieced blocks, it’s important to trim them a little before going on to add more.  You want to cut off those little tails and just straighten up the edges to make it easier to keep piecing.  I tried not to add pieces that would make it look too regular because I was going for a more random look. 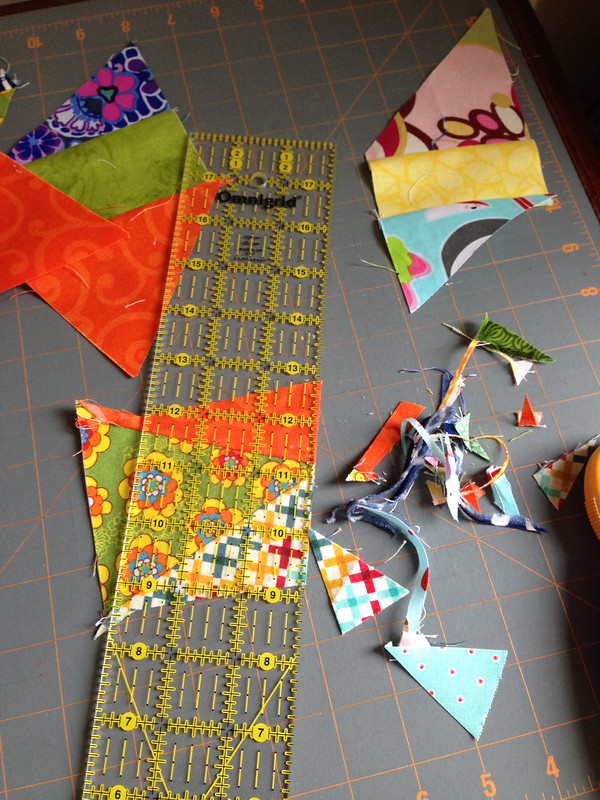 Generally speaking, I tried to have mostly straight edges with obtuse angles.  Once your pieces start to get bigger, this becomes more important.   You don’t want all those inside angles because it is hard to add pieces at those spots. 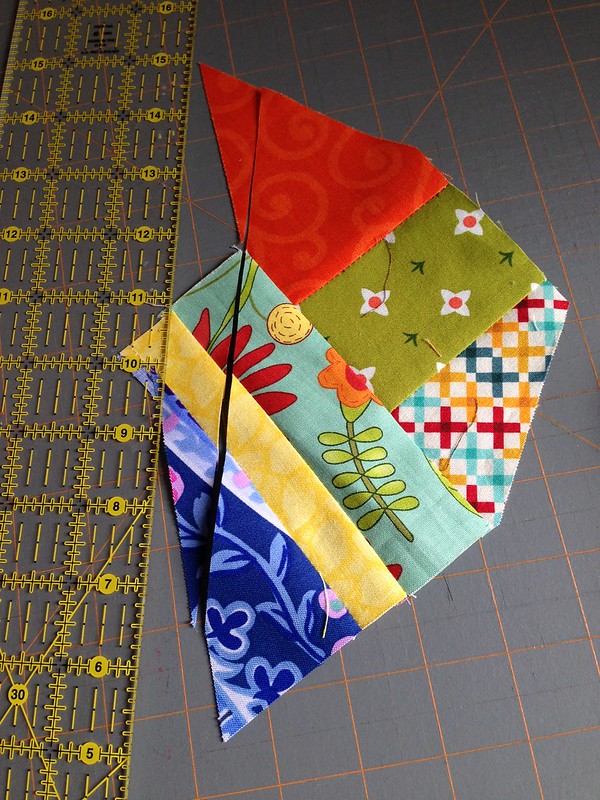 The goal was to get a piece that I could trim to 6.5 by 12.5 inches for each half of a heart.  When my pieces started getting bigger, I started to try to match them up a little to make rectangular-ish shapes. 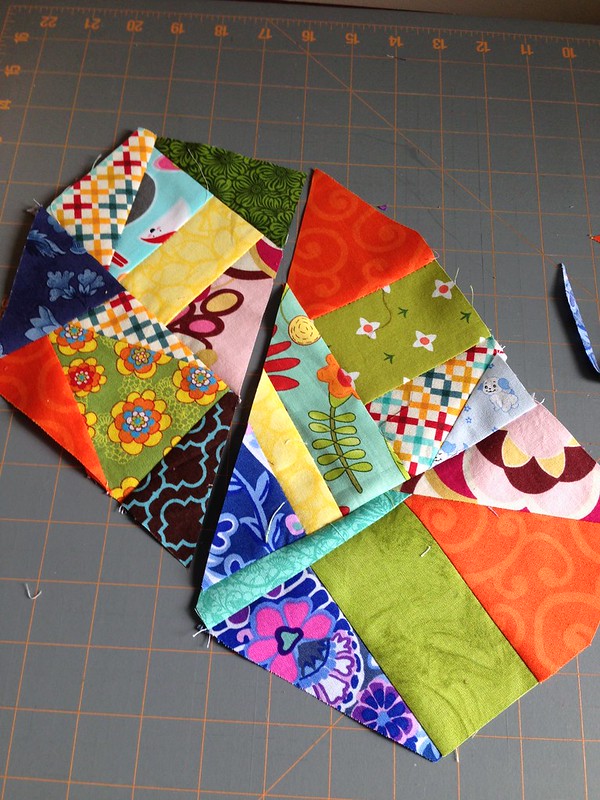 For each pair of hearts, you will need two of these pieces, with some extra for the middle of the smaller heart.  The final pieces before trimming looked quite crazy! 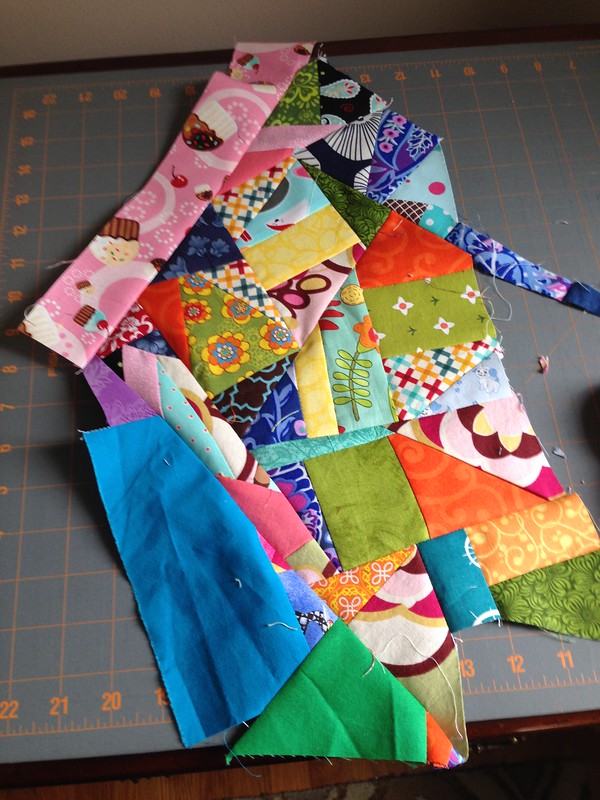 However, once trimmed down, it looked much neater.  If your trims a big, save them.  You might need them for the smaller heart. 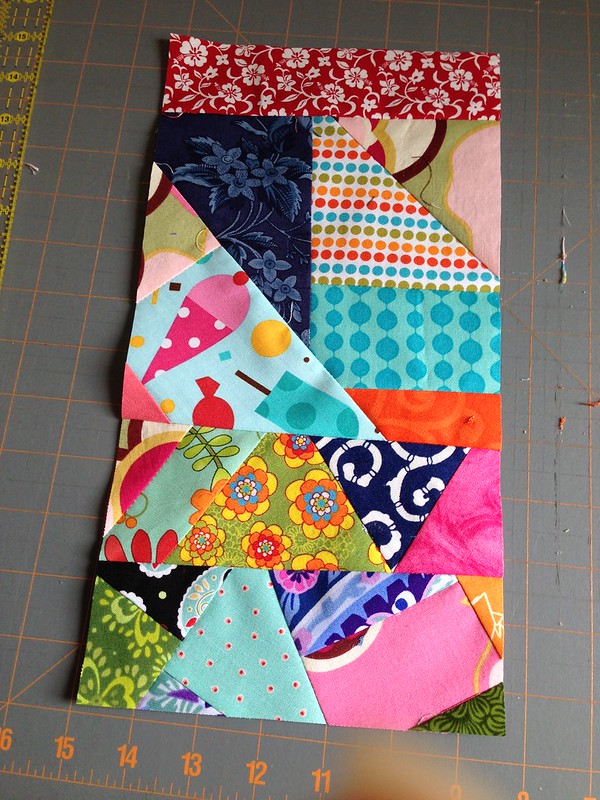 Once you have two rectangles each measuring 6.5 by 12.5 inches, you will need cut your background pieces.  I used just plain white.  You will need:

Draw a diagonal line on the wrong side of each background square. 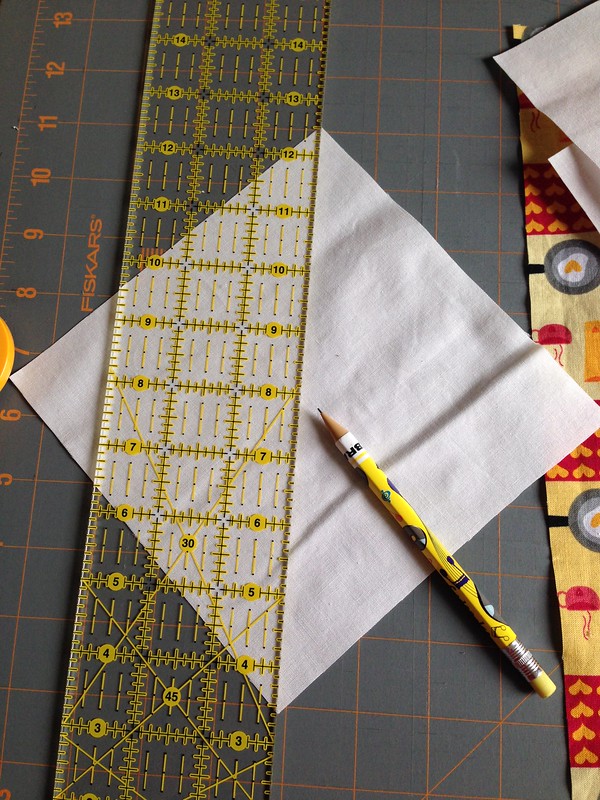 Here are the pieces you need for the big heart. 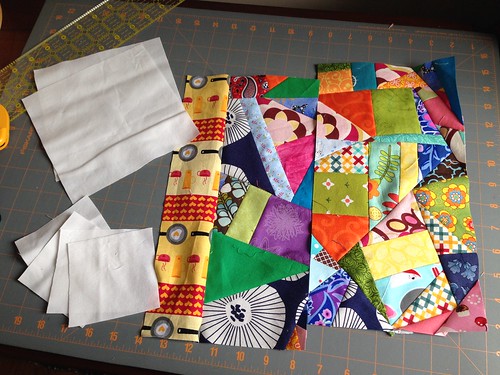 Right sides together, match a large background square to one end of a scrappy block and sew on the line.  Then, sew another line 1/2 inch away from the diagonal line on the corner side.

Now, do the same with the 3.5 inch blocks in the top corners of the scrappy block.  Here’s what you will have after this step for each half heart. 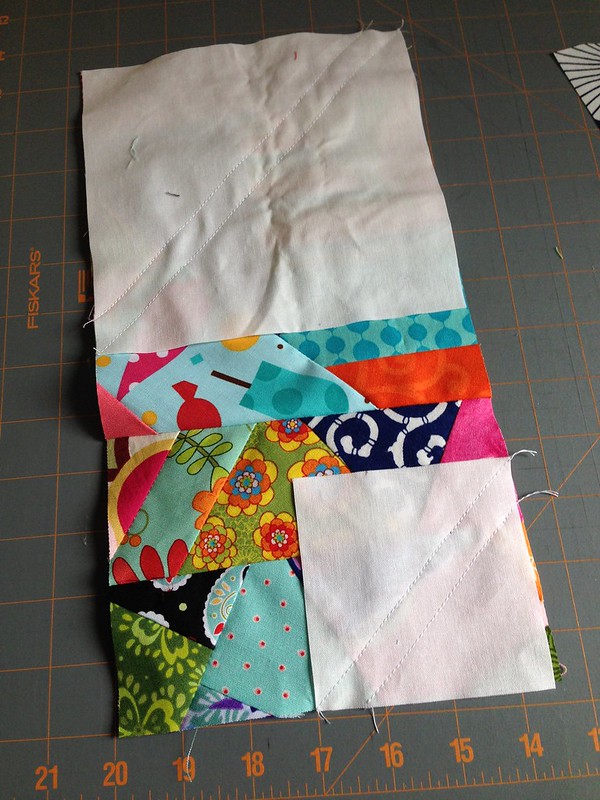 Now, cut in between the sewn lines. 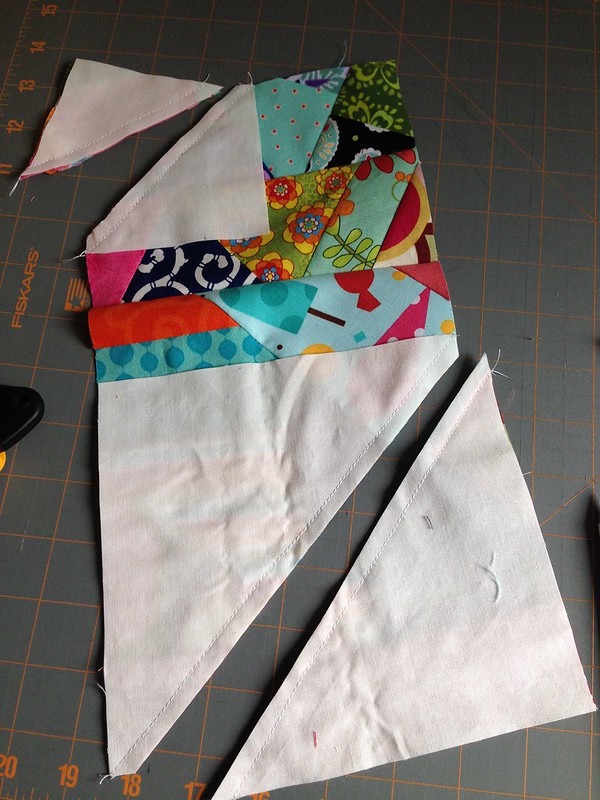 Do this again to the second scrappy block, making sure that the diagonal line is mirrored for the bottom of the heart.  In the picture below, you can see how I made sure I was mirroring the pieces before I got too far in my sewing. 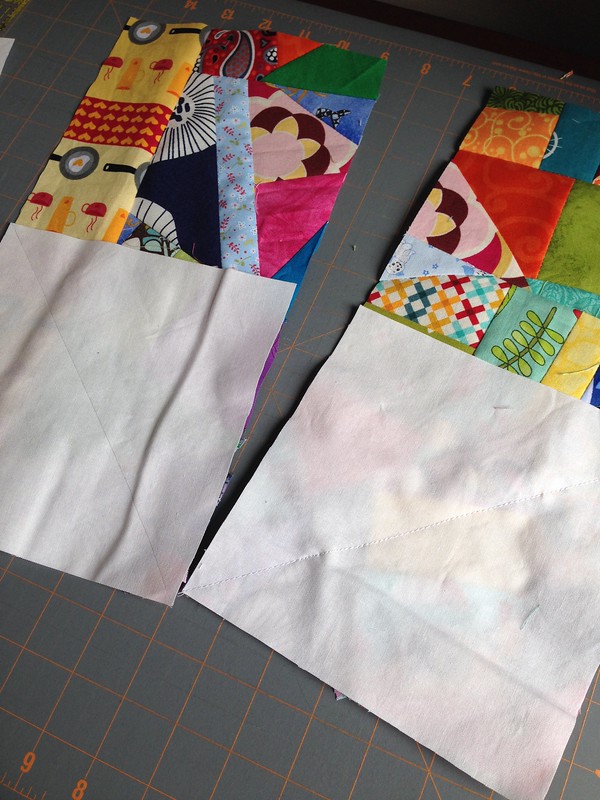 Iron the pieces and then add the other corner block in the same way.  You will end up with two halves of a heart. 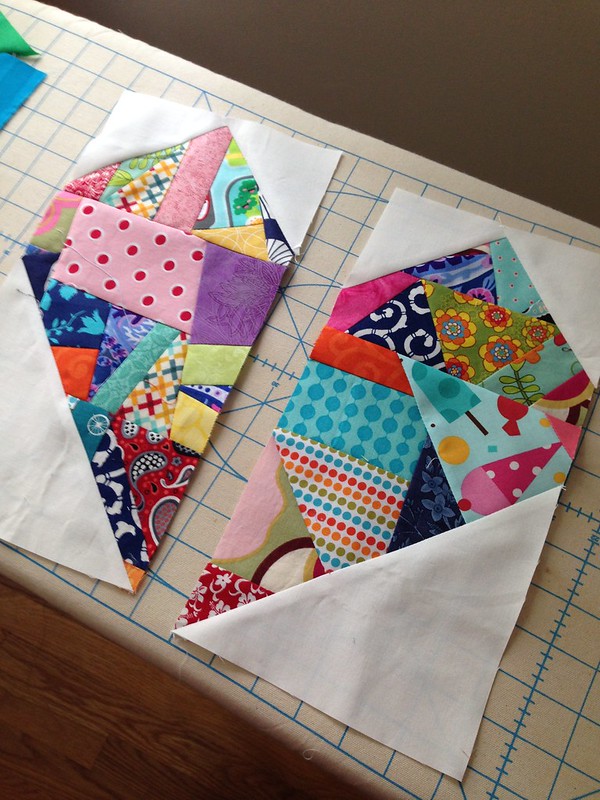 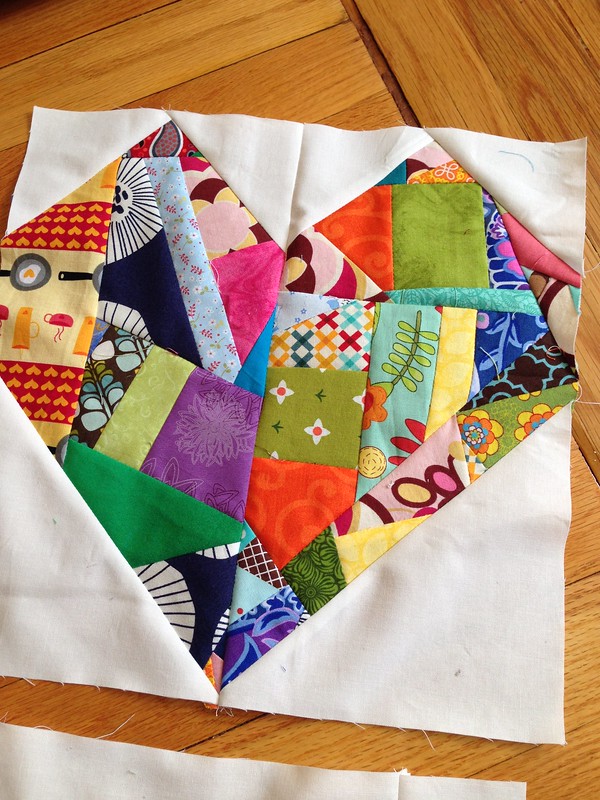 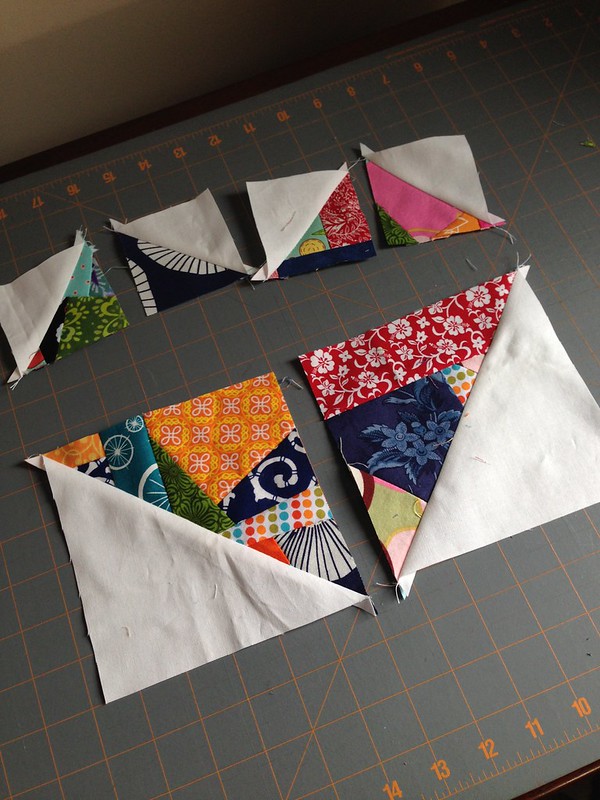 You will need to trim the half square triangles (HST)  down to make an 8.5 inch square heart.

Each small HST should be trimmed to 2.5 inch squares.

Each large HST should be trimmed to 4.5 inch squares.

You will also need:

For this, I sewed some trimmings together to make a piece big enough to trim down.  How’s that for using up scraps! 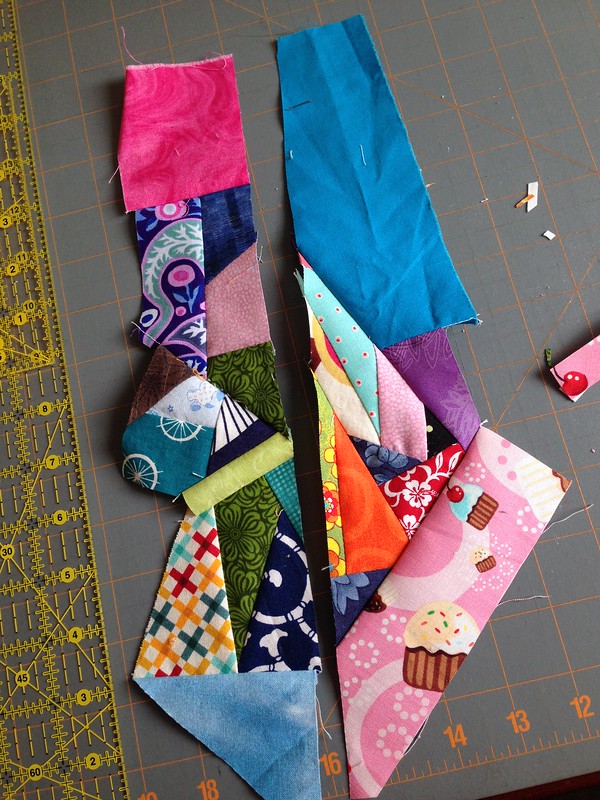 For the background, you will need to cut

Altogether, you should have this: 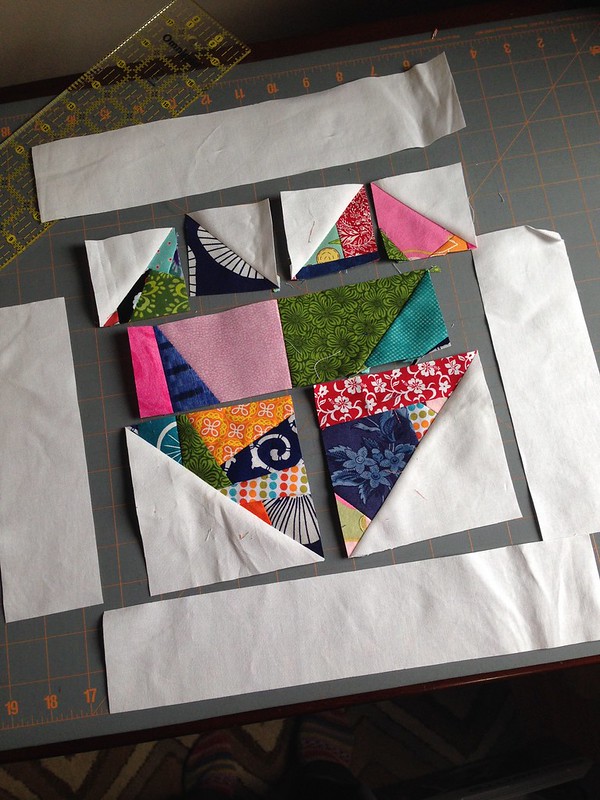 Sew all the pieces together, beginning with the heart and then adding the background sashing pieces to make a 12.5 inch square block. 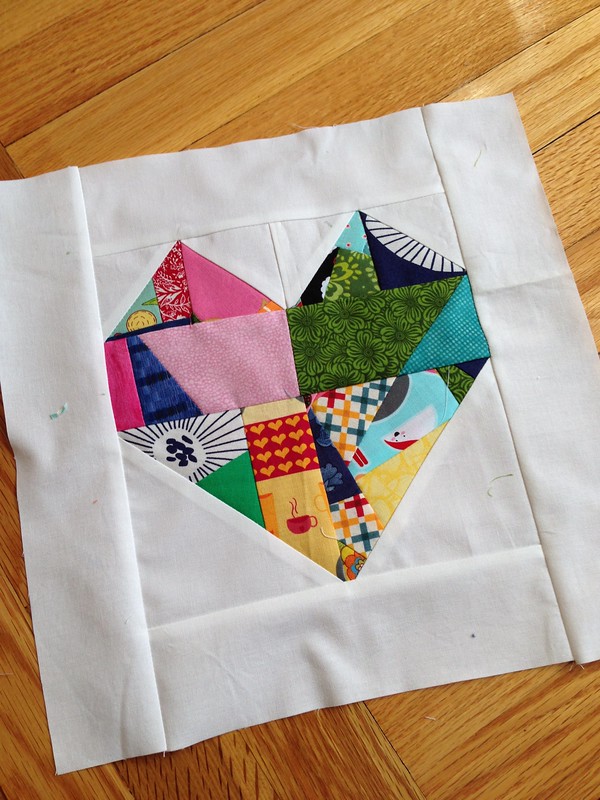 My favorite thing about making this is that you essentially can make two blocks for not much more effort than making one.  I must admit to feeling a little proud of these blocks and they were such fun to make.   I still have a lot of scraps, so more of these might be in my future.

For now, I am really looking forward to seeing what my friends from the aspire circle will make with this method.  It should be a fun and cheerful quilt!