← Three for the Road
Pink is Next →

Winter is for Knitting

For some reason, this winter seems to be dragging on for me.  Maybe it’s the fact that I was sick for a month or maybe because we have had some record breaking low temperatures or maybe because we actually have not had much snow (for New England), but I have been feeling a little weary of winter.  Don’t get me wrong.  I love winter.  I much prefer winter to the sizzling hot summer.  However, I do get a little stir-crazy sometimes and I miss going on long walks or bike rides.  Exercise videos don’t hold my attention for long and  when the roads and sidewalks are slushy and icy, it’s hard to leave the house for any reason.

So, I look for anything that might be fun to do indoors and mostly, that involves knitting or sewing or baking.  This week, I was taken with the idea of knitting a Carbeth Sweater by Kate Davies.  The MasonDixon Knitting Ladies are spearheading a knitalong for this sweater in February.  When I saw that Kate herself knit a version of the sweater with two different colored yarns together, that gave me an idea.  I gathered some yarn–four to begin with. 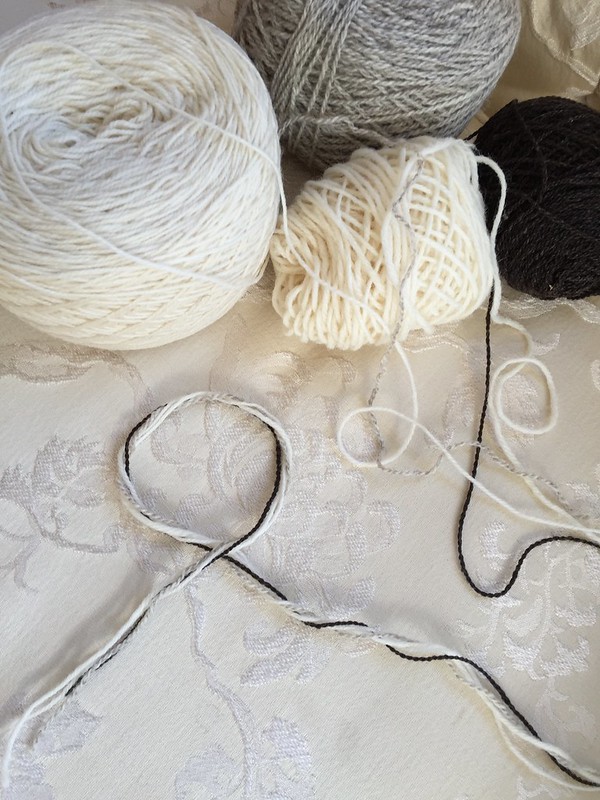 These are some odd skeins of undyed yarns that have been hanging around in the stash for awhile.  I thought it would be cool to use up some of those skeins in this chunky sweater.  All four for these was a bit too chunky for the pattern, however.  Then, I had a moment of inspiration. 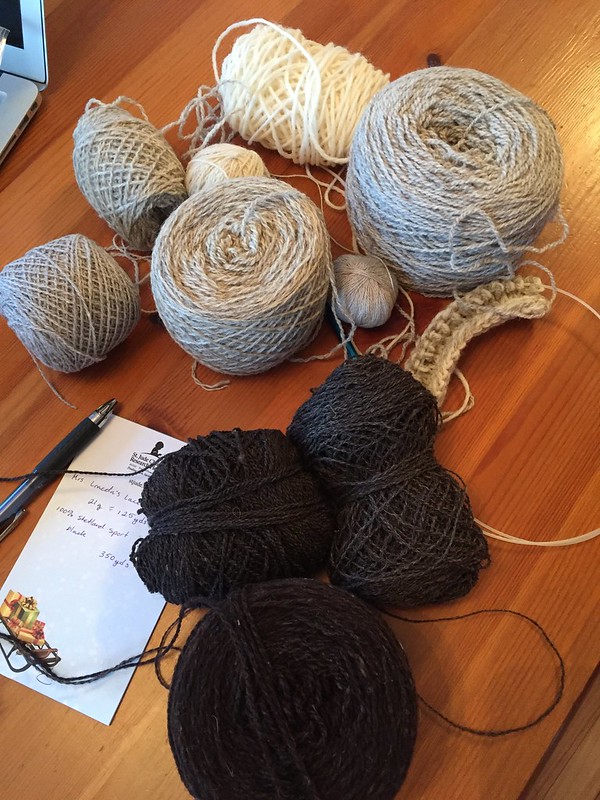 I gathered all my bits of leftover undyed yarns and sorted them into shades of color.  Maybe, just maybe I could put together some sort of gradient sweater. So, of course, I dived right in with the sleeve. 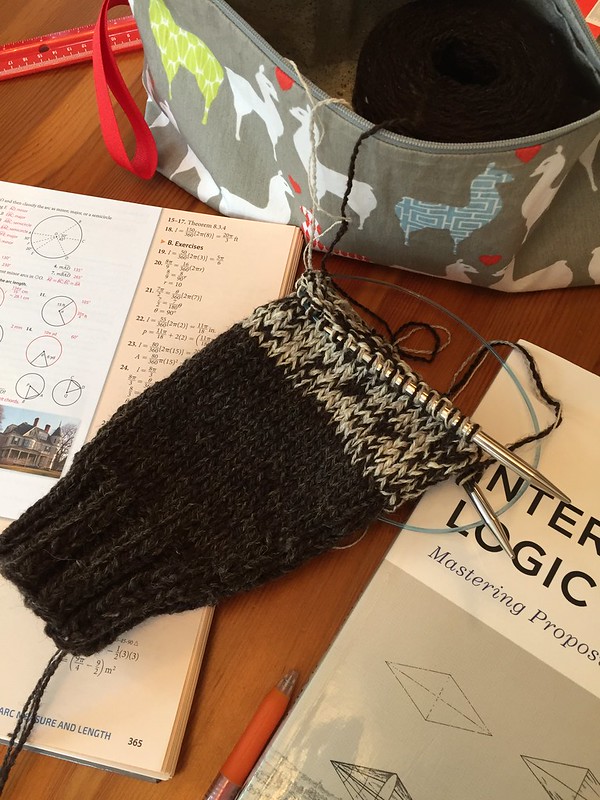 Here, I am using one strand of sport, one strand of fingering, and one strand of laceweight.  While I was knitting the dark cuff, I hatched a plan to make the sleeves and body sort of matchy.  The plan that I came up with was to divide each little ball of leftover yarn that I had into 3 parts.  One half of each type of yarn I would save for the body, and then one quarter of each would go towards each of the sleeves.  My kitchen scale was not up to the task of dividing those little skeins accurately enough, though.  Then, I remembered that we actually bought a lot of science lab equipment this year for high school physics labs and one of the things we bought was a mass balance scale.  It can weigh tenths of grams.  Hurray! 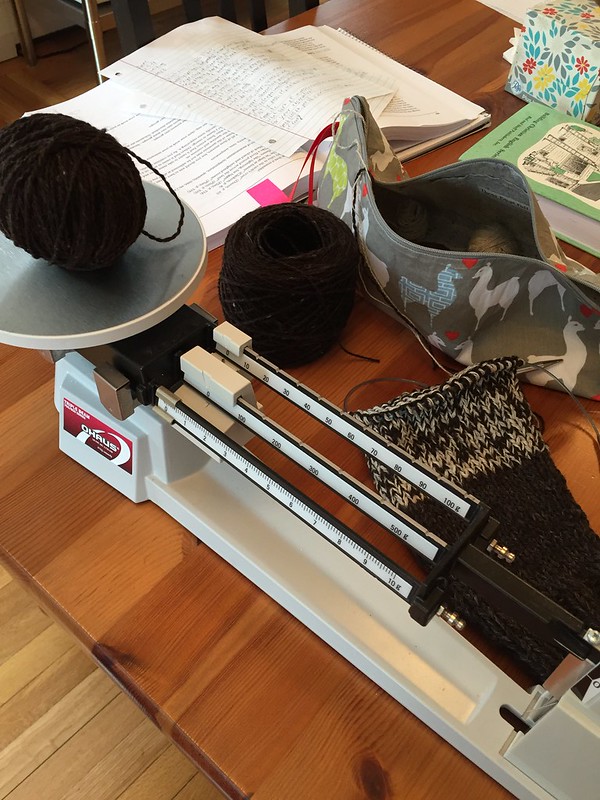 I’ve got most of the yarns divided now and was able to get almost a whole sleeve done in just one day.  Sadly, I needed to slow down the knitting a little because I was having trouble with one of my thumbs and chunky knitting is hard on my hands.  Hmmm, perhaps I have been knitting a little more than usual lately?  So, I took a day or so off from knitting and did some other things.

Starting today, though, I will embrace winter knitting once again because today the Winter Olympics begin! Actually, tv coverage began last night, but today is the official opening.  I really look forward to watching the olympics whenever it comes around (summer or winter) and I take that opportunity to tackle a nice knitting project to work on while watching the games.  This year, it’s a yoked sweater, surprise! 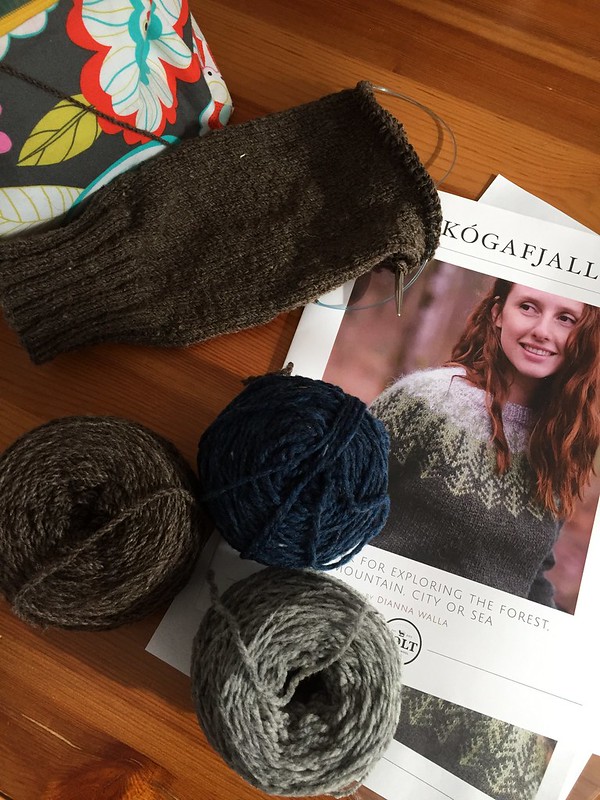 ← Three for the Road
Pink is Next →