We like to eat good food, but good food can be really hard to find. Baltimore is not really known for its food scene. It’s a little city, when you look at it on a scale of cities around the world. It’s also had to share a lot of foodie clientele with Washington DC, which has a large international community. Wherever there are a lot of international communities, there is good food. It is not unusual for us to make the 90 minute drive down to the DC area to go get some really good food.

But, as much as we like really good food, we do not have the time to drive down to DC every time we want to eat good food. Also, we do really like to support local businesses as much as possible. So, we make do around here, and we have figured out some really great places to eat locally.

Here is one that we just rediscovered.

We first found this place by accident over 10 years ago and loved it. We ate there a few times. Then we moved to a different neighborhood and sort of stopped going down that part of the road. It’s one of those ubiquitous hole in the wall pizza places. You know, one of those places that are so numerous that it’s easy to overlook them. After all, don’t most of them serve mediocre pizza, greasy subs, and sticky pasta?

Well, not this one. It’s not going to be one of those places that achieves nationwide fame, but for a local pizza joint, it’s one of the best.

I am picky about my pizza crusts and sticks. It has to be crispy on the outside and soft on the inside, with a little chewiness. Lots of pizza crusts are just rubbery or flabby or just too thin and hard. The bread and crusts at Fortunatos is one of the best I’ve had. And I try a lot of pizza crusts–it’s the only part of a pizza that I can eat without getting sick from the cheese. This one is crispy on the outside with just the right amount of softness and chew. It’s not overly sweet and has a great wheaty flavor. 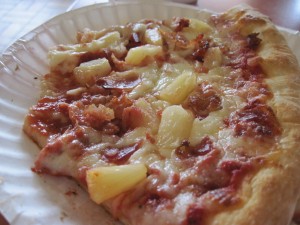 I don’t know if you can tell, but it had ham AND bacon on it. Usually Hawaiian pizzas just have deli ham, which I feel sort of meh about, but bacon really takes it up a notch. They must have had at least 10 different kinds of pizza in the case and they all looked good. If I could eat pizza, I would have tried the one with spinach on it.

But, my salad was pretty good.

It was way bigger than I expected for the price I was charged and freshly made. The Italian dressing was also house made.

Now, we usually tend to avoid pizza places because there is almost nothing I can eat there as a lactose intolerant person. Melted cheese is one of the worst things I can eat and no lactase pill is strong enough to counteract it. But, I love this place because they make one really delicious thing that I Can Eat!

Tomato Bread. Fresh tomatoes tossed with olive oil, salt. herbs, and garlic, then placed in a yummy, extra large breadstick. Yum. I was really disappointed when I got there and there were no tomato breads in the display case. However, they were just making more because they had sold out. Freshly baked, they were even better than I remembered.

We haven’t tried the subs and pastas, but we might next time we go. Or, I might just have to have some more of that tomato bread.

So, if you feel like having some pizza that is guaranteed to be good, try Fortunatos. They’ve been around for at least a decade and their food is the same quality as it was when we first tried it way back then. That by itself says something. If you do go, save me one of those tomato breads please!