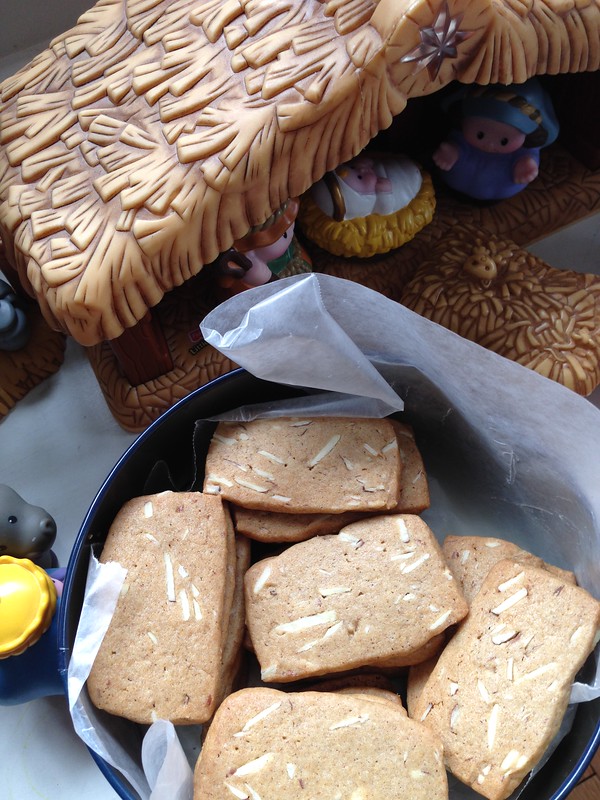 I’ve come across this recipe a number of times in my endless trolling for cookie recipes online and I even have the book that it was originally published in.  By all accounts, it is a perfect cookie.  Nutty, buttery, crisp and perfect with tea or coffee.  It’s also a good keeper and the recipe makes a huge batch of cookies so that you can keep most of the dough in the freezer for cookie emergencies.  I’m not sure why it has taken me so long to try this recipe, actually, since so many bakers that I respect have raved about this cookie.  But, better late to the party than never, right? 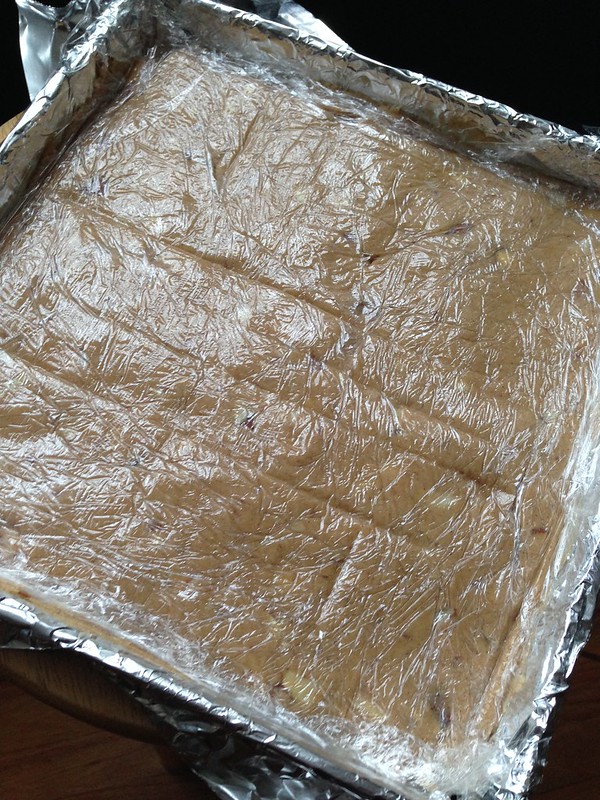 The dough comes together quite easily and then you press it all into a square pan.  Place in the fridge to firm up overnight. 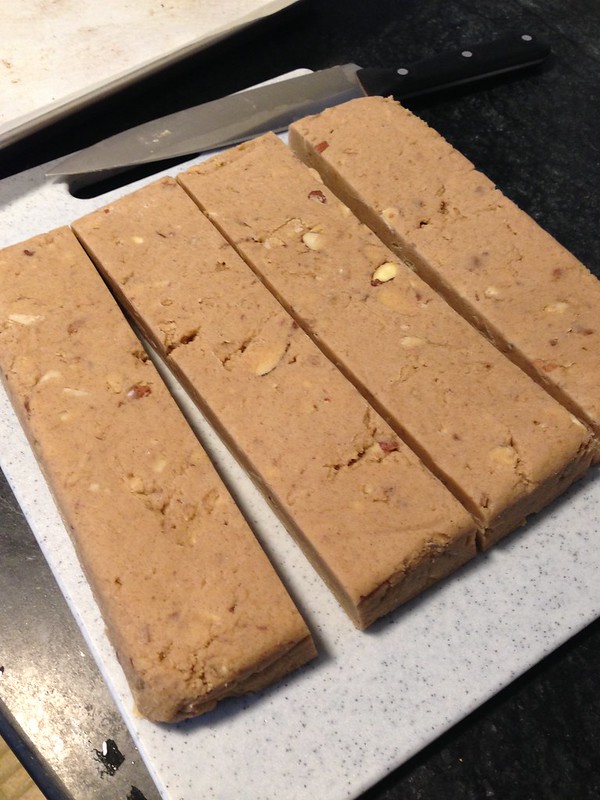 Then, the next day, you can slice them up. 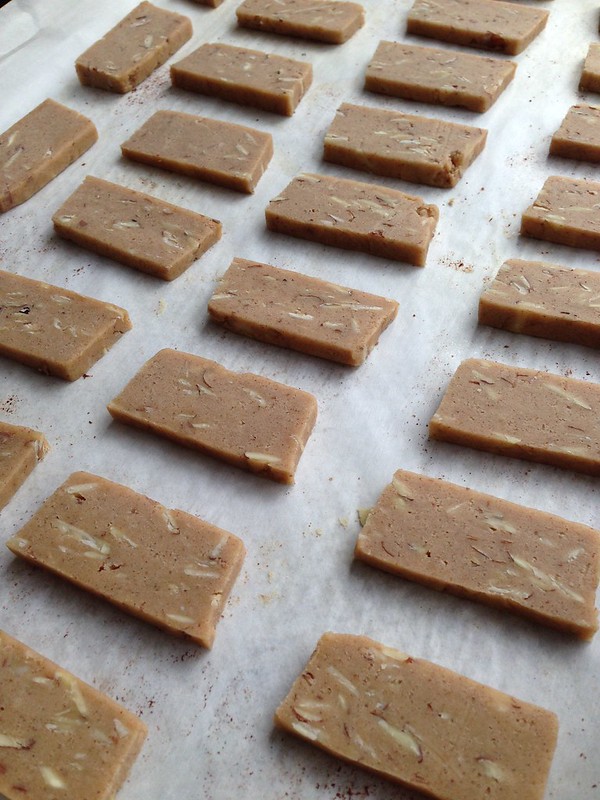 And bake them.  I only baked a quarter of my dough, which made roughly three dozen.  The rest I wrapped and froze for the future.  This was a really good recipe to kick off the cookie baking season here. 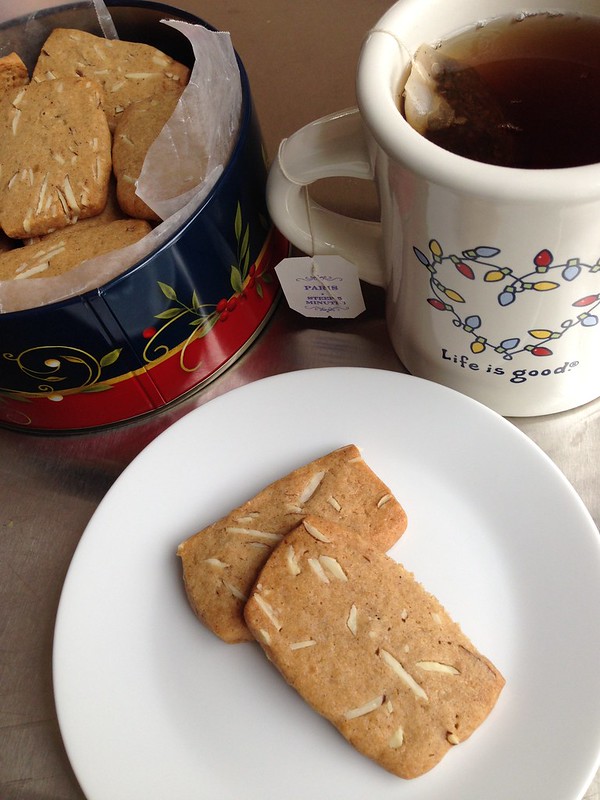 It’s quite a good cookie, though not fancy to look at.  The little bit of spice makes it more than just an almond butter cookie.   I suspect that this is one of those cookies that doesn’t impress you at first, but is instead the reliable one that you can count on when a cookie situation arises.  It’s the type of cookie that you can eat everyday of the year and not get tired of it, which makes it actually quite special indeed.

Recipe for Pains d’Amande can be found here.

Don’t forget to leave a comment to be entered into the drawing.  More details here.  Tell me, What cookie can you eat everyday and never get tired of?

Last week was the beginning of our third annual cookie dough fundraiser. We started this a couple of years ago as a way for the boys to be involved in some sort of service project that would help them to think outside of themselves. Back then, it seemed like much of the opportunities for serving were more appropriate for older kids. In several years, we will look into other opportunities for the boys to serve people locally and face to face, but for now, we make cookie dough and sell it.

All the money we collect, we send to Samaritan’s Purse, an organization that helps disadvantaged people all over the world, even in our own country. You might be familiar with their popular Operation Christmas Child Box drive in which they collect shoe boxes full of toys, candy, books, and whatever else you can fit in it. They then distribute these boxes to kids in countries all around the world. Last year, I think our box went to a boy in the Ukraine.

First, the boys set a goal. This year, they hope to raise enough to pay for a village well, among other things. The well is about $400, according to Samaritan’s Purse. The boys get really excited when we get close to the goal and they are over the moon when we surpass it.

The great thing about this project is that everyone in the family has an opportunity to use their strengths to make it successful.

The husband handles the forms and other technical jobs such as forming dough logs.

My elder son is in charge of taking orders and organizing the labeling and containers.

I do most of the mixing and measuring while the youngest in the family rolls dough balls, counts, and bags the orders.

Of course, there is lots of taste testing that goes on during the drive itself and all year as I periodically test new recipes. Quality control is extremely imortant to us.

Right now, our entire house if overrun with stuff for this project. So far, we’ve used 14 pounds of butter and 20 pounds of flour and we are nowhere near done yet.

All this work is worth the effort, though. The lessons of sharing our wealth, helping others, and working together are priceless. A cookie or two every once in awhile doesn’t hurt either.

Here’s an idea for a make ahead apple dessert.

Make a batch of your favorite pie crust dough. Don’t have one? Here’s mine. Or, you could buy premade dough.

Roll out your dough into a large rectangle, about 12 by 18 inches.

Cut the dough into 6 inch squares.

Place a peeled, cored apple in the center of each square. I used the apple peeler corer slicer; it makes the final dumplings a little easier to eat. As you can see, I am not too bothered by a little apple peel.

Fill with a mixture of butter, brown sugar, and cinnamon. You can add raisins or nuts, too, but I don’t like to, so I left them out.

Bring up the corners and edges of the dough and press them together at the top of the apple. Place on a foil lined pan. Top with a sheet of plastic wrap and freeze.

Once frozen, wrap them individually in plastic wrap and store in a freezer bag until you want to bake them. You can thaw them in the fridge if you like, but I usually don’t think that far ahead. I put them on a ceramic dish and bake at 375 F for about 45 minutes or until golden brown and a sharp knife can be poked into it easily. Some juices may ooze out, but this just makes it extra yummy. I love this method because I can bake one or five dumplings as needed.

Here is another way to freeze apples for future pies and crisps.

Again, peel, core, and slice your apples. I did 7.5 pounds because that’s how much fit into my pot. Pour three or four glugs of apple cider into the pot, along with the juice of three lemons. I also tossed in 8 ounces of brown sugar and one teaspoon of ground cinnamon.

The key here is to simmer and stir very gently. You do not want a rolling boil; a gentle steaming is preferred. Also, you’ll want to use firm apples that will not turn into sauce when cooked. After about 20 minutes, your apples should have reduced in volume quite a bit. See that pot above? It was full to the top with apples when I started. You want the apples to be wilted, but still hold their shape. Then, gently transfer them into quart sized containers, leaving behind as much of the juice as possible.

Boil the juice you left behind in the pot until it’s thick and no less than 1/2 cup. You don’t want it to be candy, just the consistency of thick syrup to concentrate all those yummy appley juices. Divide the syrup evenly among your apple containers. I was able to fill three quart sized containers. Let them cool and then you can transfer them to the freezer where they can live for up to a year. One of these containers makes a nice pie or a small crisp; just thaw and dump into your dish or prepared pie crust and bake!

You may have noticed that I don’t add any thickener. This is because I boil a lot of the excess liquid out after the apples come out of the pot. In addition, I think the apples taste more like apples without the thickener, but you can feel free to add some if you think it is too juicy when you are about to use it. Also, keep in mind that freezing apples makes them soft, so if you like your apple desserts with crunchy apples, it’s best that you make them fresh.

Well, those are the two ways I freeze my apples for future desserts. I hope it comes in handy for you and your apple harvest! Don’t forget, I’m giving away a jar of apple butter in yesterday’s post. Leave me a comment for a chance to try my caramelized spicy apple butter.

Next: Apple cake made easier