Hi All!  Just popping in to announce the winner of the Christmas Treat Box Giveaway.  I used the random number generator to help me pick the winner and it chose post 67, which is Laura C. with this post:

“I’ve seen these cookies before but never had any. Glad the machine was fun and easy to use”

Well, Laura, there are some pizzeles in the box I just shipped off to you, so I hope you enjoy them and the other treats as well! 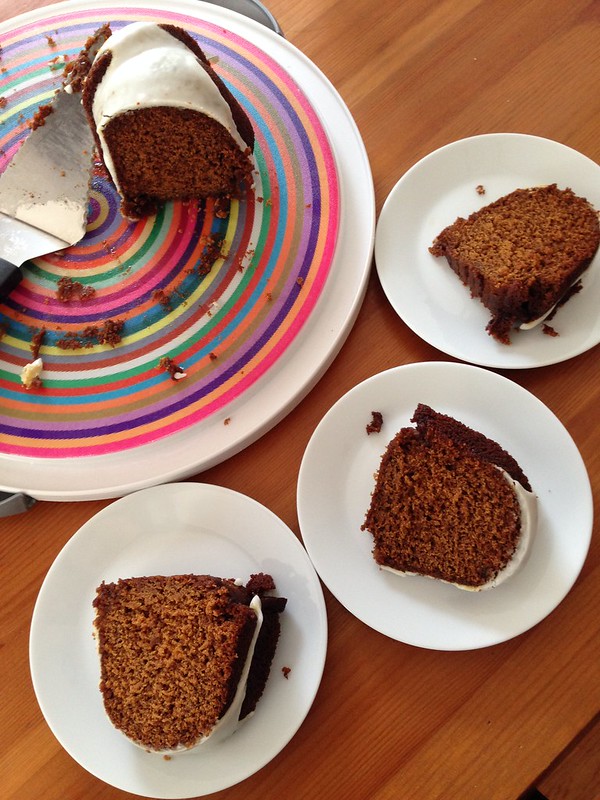 Thank you to all of you for being faithful readers and commenters.  I wish you could be here to enjoy a piece of cake with me.  Our event on Saturday ended up being cancelled due to weather, so we’ve had to eat the whole cake by ourselves, but I would have loved to share it with you.   You all make writing this blog a lot of fun! 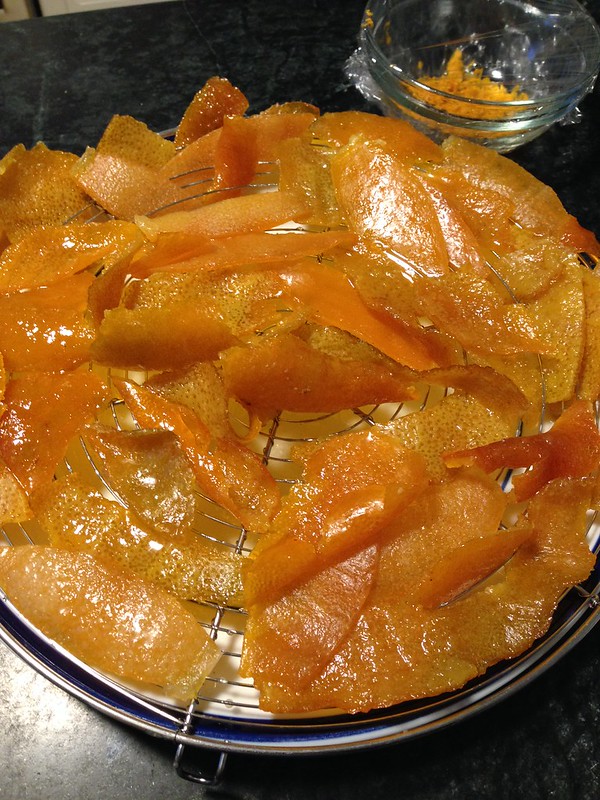 Today, despite getting off to a late start, has been fairly productive.  My candied orange peel is drying now. 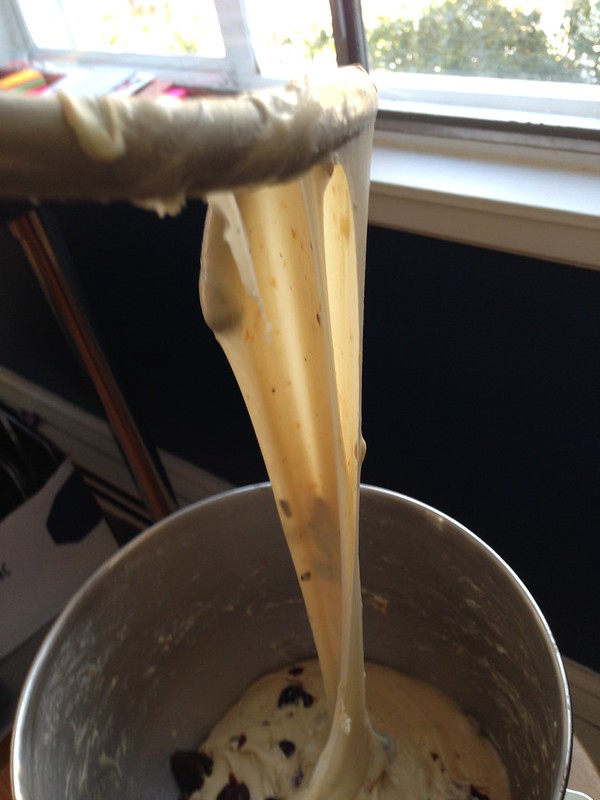 And the next batch of panettone dough is made and rising (very slowly).  Do you see how stretchy and sheer the dough is?  Heavenly!  I know it’s only Monday, but the week is looking good so far!  How’s your week looking?

Christmas is a week away and I don’t know about you, but I still have a lot left to do.  Thankfully, I have a pretty clear week in which to get them done.  Unfortunately, I sort of ran out of time this weekend and there are still too many balls in the air to have a finished topic today.  However, I can show you a few things that I am hoping to get done in the next few days. 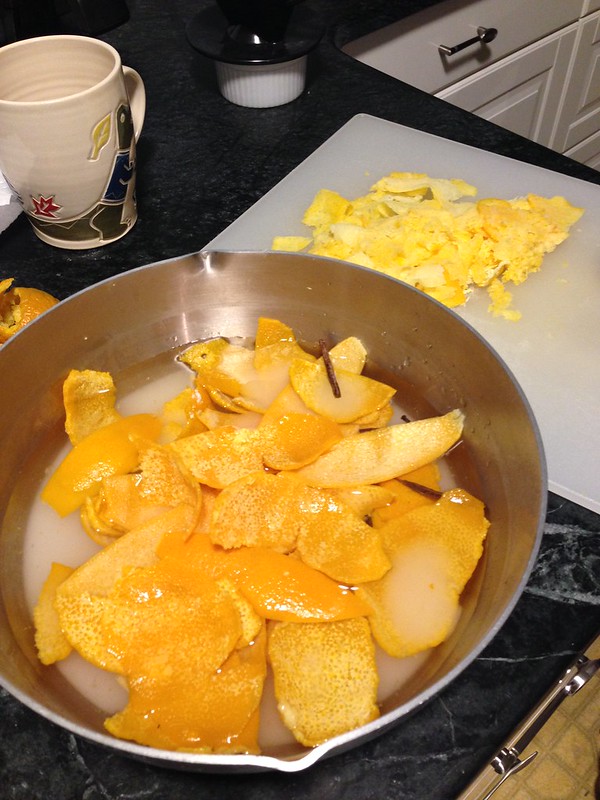 The first one is to finish up this batch of candied orange peel.  There’s lots of recipes out there for making candied orange peel.  Here’s a good one.  Orange peel is a pretty essential ingredient in a lot of my Christmas baking, but it’s also fabulous to eat on its own.  It’s also good dipped in dark chocolate! 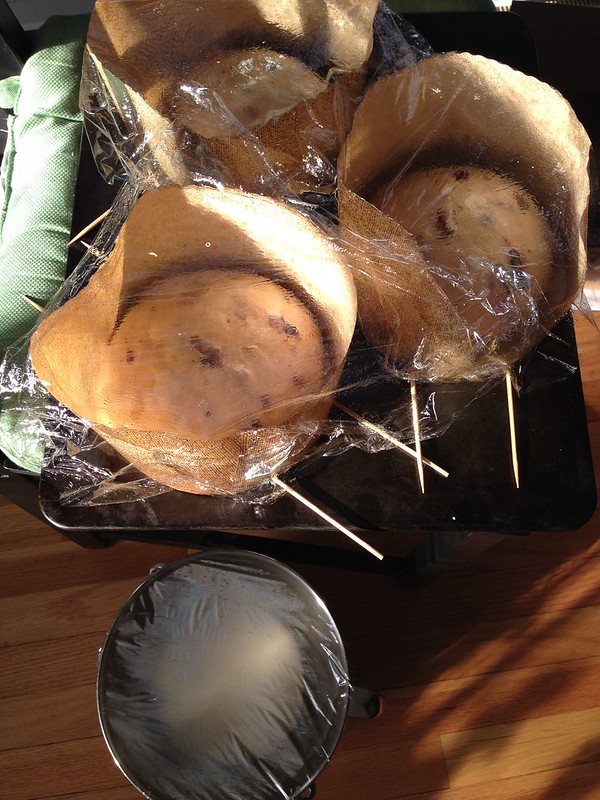 Next on the agenda is to work on making another batch of panettone.  I made a batch last week using a new recipe, but it didn’t turn out as well as I would have liked.  It was a recipe I had in my files that I definitely got off the internet, but now I can’t find it.  Funny. 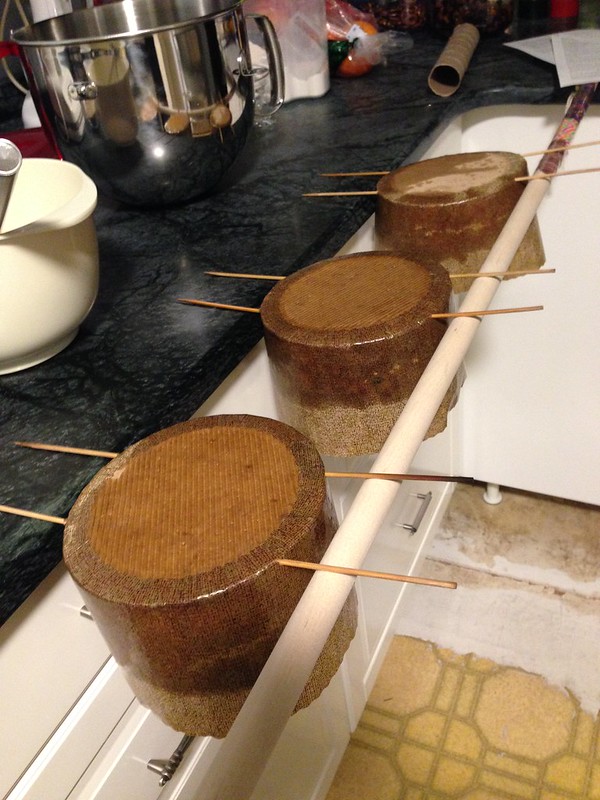 Anyway, it was good, but not quite the texture we’re used to, so I want to make a few adjustments and try it again.  I may be able to talk about it later this week if it works out! 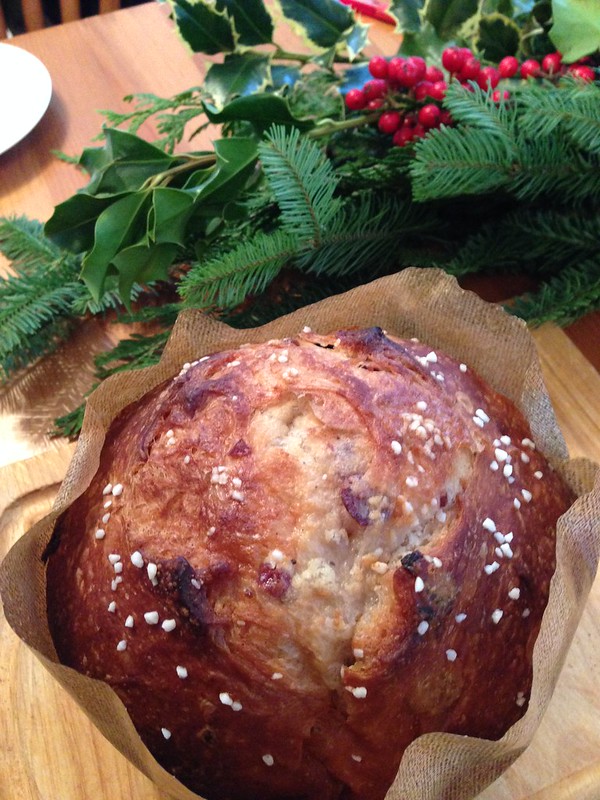 In the meantime, this brings us to the end of my 12 Days of Christmas Blog series.  It’s only one week until Christmas!  For one more entry into the Christmas treat box giveaway, leave a comment here before noon eastern standard time tomorrow (December 19).  I’ll announce the winner in the early afternoon and hope to get that box shipped out soon after.  Thank you so much for joining me these past 12 days!  See you tomorrow!

Today’s treat is not baked, but very tasty and easy to make.  It amazes me sometimes how much we are willing to pay for chocolate truffles when it’s not terribly hard to make them at home. 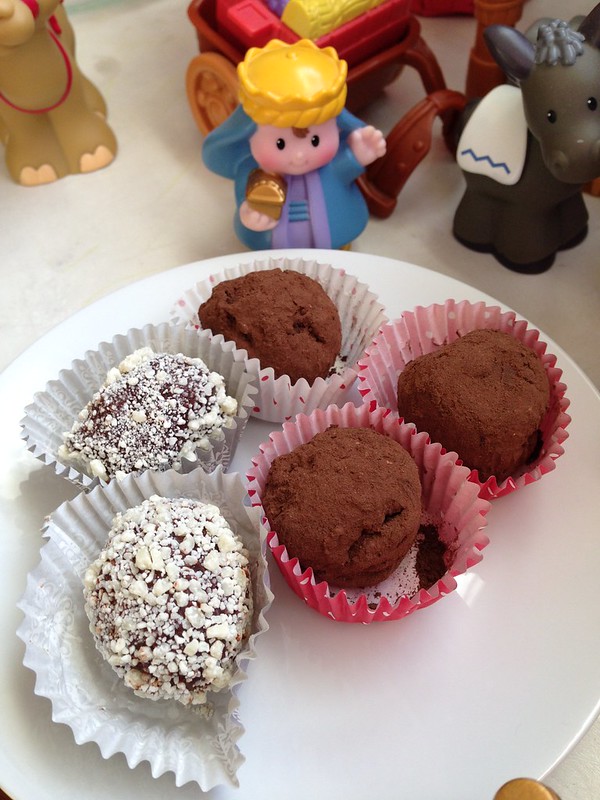 The thing that makes these so easy is that they are rolled in a coating and not dipped in tempered chocolate.  Tempering chocolate is a tricky business that involves quite a bit of precise temperature regulating.  If you eliminate that step, though, you get a treat that even kids can make. 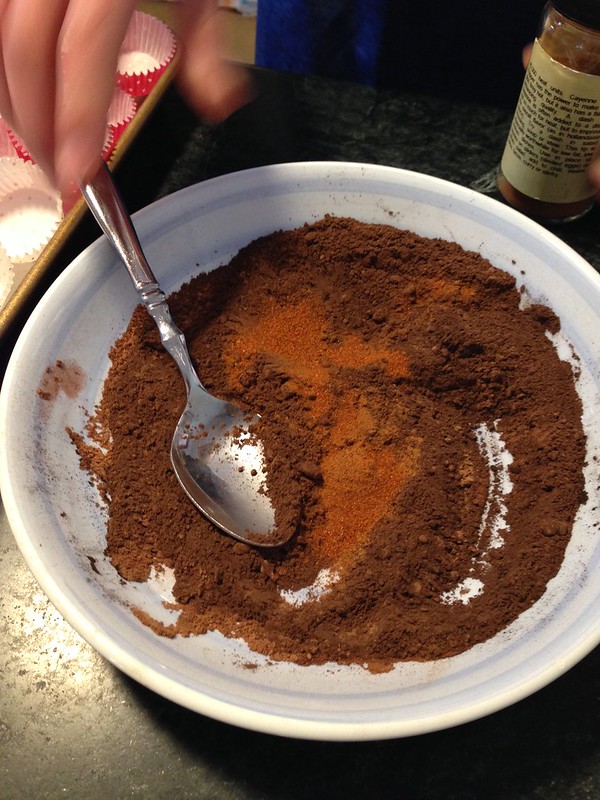 In fact, that’s just what my kids did yesterday and today.  They each chose a flavor for their truffles.  One chose peppermint and the other mexican chocolate. 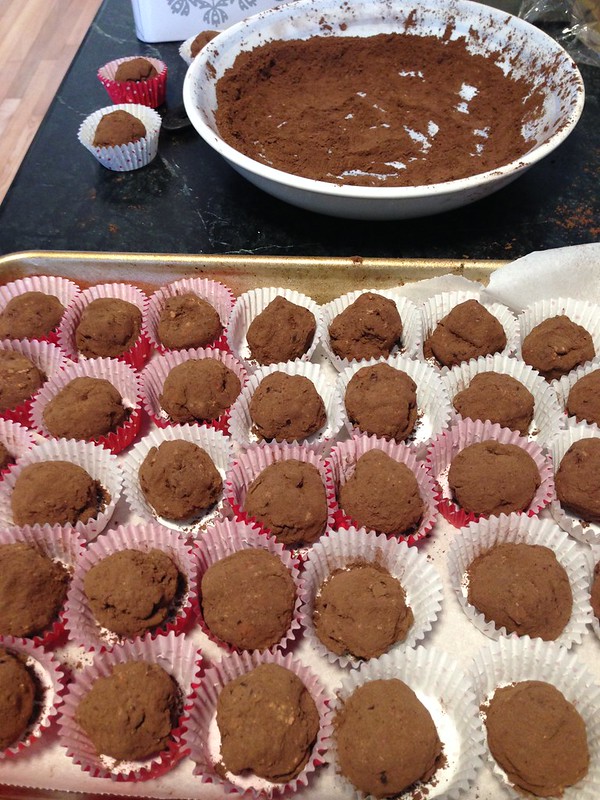 I was busy shuttling back and forth between the two of them so there are no pictures of the chocolate mixing process.  The recipe I used can be found in Dorie Greenspan’s book, Baking Chez Moi.  However, there’s lots of similar recipes out there if you want to try them. 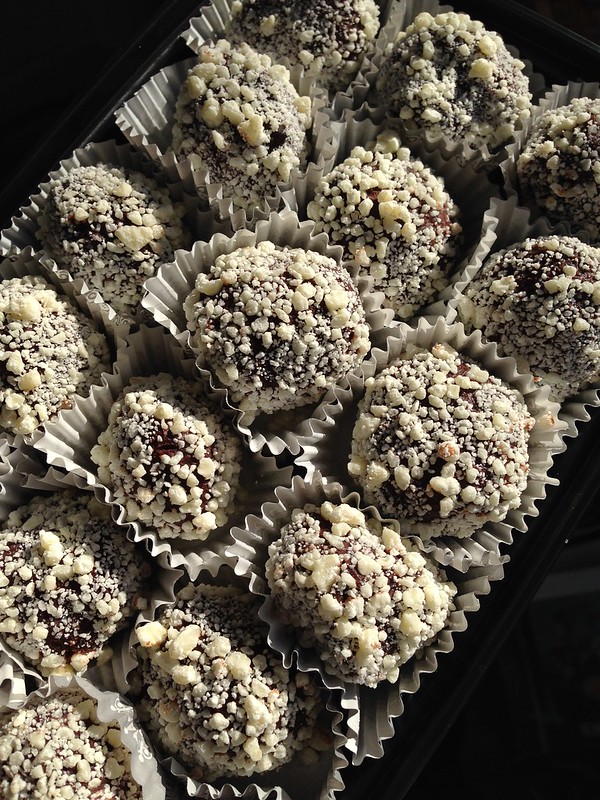 Rolling the ganache into balls was messy, but it doesn’t really matter if they are done evenly because it all looks good in the end after they are rolled in their coatings.  The peppermint ones got rolled in ground up white chocolate, while the Mexican ones got a cocoa powder/cinnamon/chili powder coating. 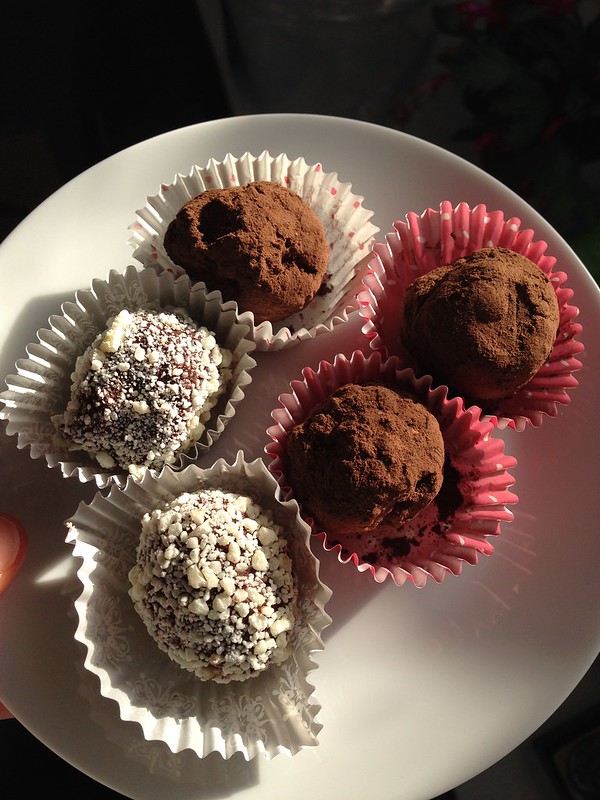 Because these are not coated with tempered chocolate, they have to be stored in the fridge.  They taste better if you leave them out for a while to warm up, though.  The boys are planning to give some of their truffles away as gifts to their friends.  That’s only if we don’t eat them all first!

I’ll be sure to include a few in the Christmas Treat box that I am giving away in just a few days.   Be sure to leave a comment to be included in the drawing.  (If you need the rules, here they are.  Tell me about your favorite chocolate.  My favorite chocolates to eat are from Chuao.  They have a passionfruit truffle that is really yummy!

Because of our move, there were a lot of things that we were not sure we would be able to do this year.  So many ordinary things that were easy before seem to take twice as long in a new place.  Getting ready for Christmas is no exception.  First of all, finding a Christmas tree farm was challenging.  The first one we went to was….limited in every way.  The choices seemed designed to make you want to run into the barn and buy the first pre-cut tree you saw.  So, we went to another farm, farther away, which was better, but still nothing like the well-ordered and trimmed place we used to go to.  Still, being short on time and nearing the edge of hangry, we made a choice. 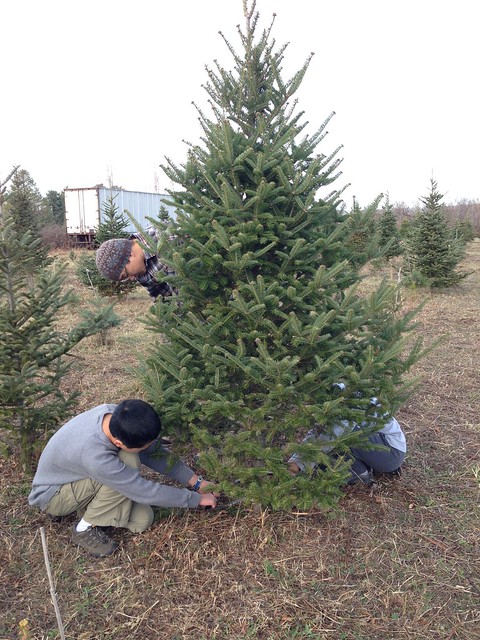 Yeah, it’s a little lopsided and has some empty spots, but we decided we might learn to love it. We cut it down and the boys carried it off while I followed behind. Sometimes, it is really nice to have boys. 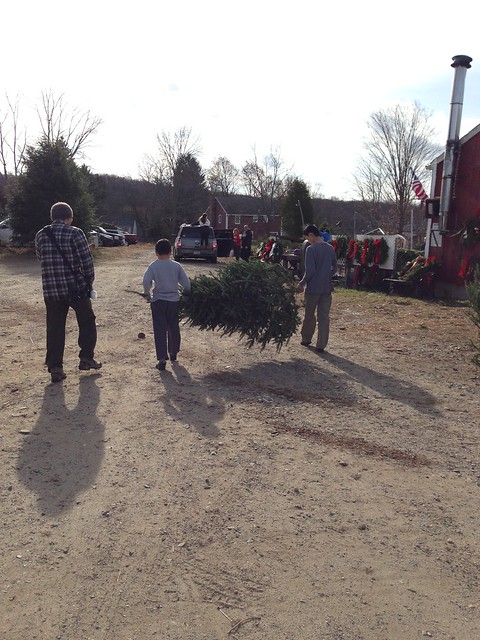 Over a week later, we have finally decorated the tree and I have begun to do some prep work for Christmas baking. 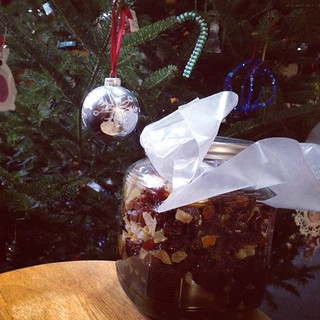 The second thing that we were not sure we would be able to do is our annual cookie fundraiser for Samaritan’s Purse. 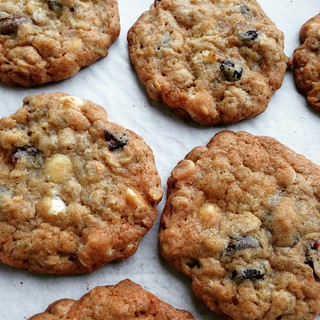 It took us awhile to figure out what we were doing, but we finally got a modified version organized. It’s a lot smaller and the totals are much lower than year’s past, but we are still happy to be doing it. It turns out that the more things we do that feel ‘normal’ the less sad and homesick we feel.

This leads me to the third thing I was not sure I would be able to do this year: My annual Twelve Days of Christmas countdown and Giveaway. If you are new to my blog, you can see what I have done in year’s past in this post from 2012, 2013, and last year. This year, I am going to be focusing on do-it-yourself gifts. I am feeling short on time, energy, and resources this year, so these selections are all going to be about keeping things simple without sacrificing quality.

As usual, I will be giving away a box of goodies accumulated over the next 12 days from all the crafting and baking. Just like last year’s give away, you may enter by leaving one comment per post. Only one comment per person will be counted per post, but if you leave a comment for all twelve days, you will be entered twelve times! The box will mostly likely include many of the treats featured in the posts, but perhaps not all of them because not everything travels well or keeps well. Plus, I will be trying some new recipes, so there may be a flop or two. However, I will try to ensure that the winner has a nice variety! Because of perishability issues, I will have to limit this to a domestic (that is, just the United States) contest. Comments on all 12 posts must be received by midnight, December 19, eastern standard time. I will pick a winner at random on the 20th. Hopefully, I can ship on the 21st. 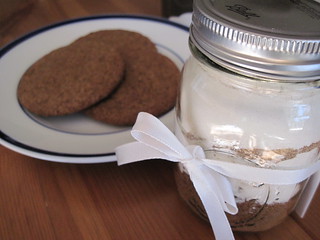 To start off, since this post is already so long, I am going to refer you to my post on Sugar and Spice cookie mixes. These would make a fabulous gift for anyone who likes spice cookies and they are really easy to mix and bake. I will put one of these mixes in the box.

I am really looking forward to trying some new things and sharing them with you. Don’t forget to comment! Tell me about your favorite holiday tradition.

Tags: do it yourself, gift, giveaway 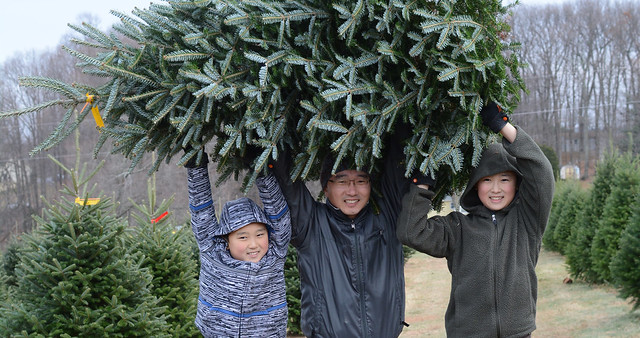 It’s time to announce the winner of my box of Christmas goodies! The random number generator picked post # 74 by Heather S:

Love candy canes. Although chocolate with peppermint is always good.

Congratulations, Heather! I hope you enjoy the treats! 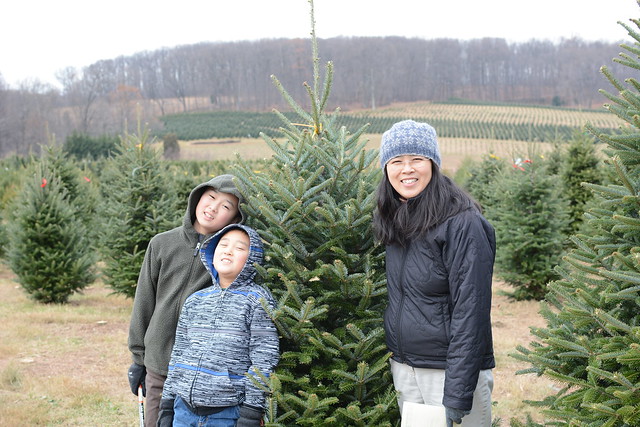 Thank you to all of you who followed along my 12 Days of Christmas candy craziness. Now I can bake some Christmas cookies! From our family to yours, I hope you have a wonderfully sweet Christmas.