Until a few years ago, I never knew that a person could make their own marshmallows. And when you can buy a bag at the store for just a couple of dollars, why would anyone want to bother? Well, that was what I thought before I actually tasted a handmade marshmallow. They are astounding. Of all the candies I have made during this series, this is the one in which the store bought version and the homemade version are really two different candies.

It is hard to describe the difference. Homemade ones are softer, more flavorful, and not as sticky. Plus it’s missing any artificial flavors or aftertastes. All I can say is that they are fabulous. 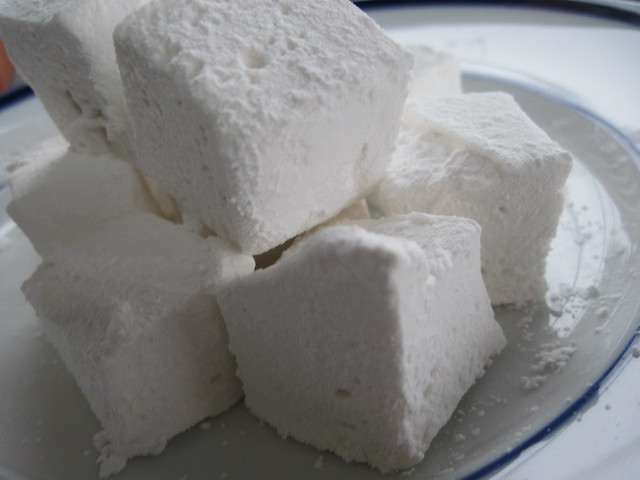 Also, they are not too hard. I looked around at a lot of different recipes and I found that they were divided into two camps: ones that used egg whites and ones that did not. It took me a long time to decide on a recipe, but in the end I chose one that did not use egg whites because I thought that would prolong their shelf life. Also, egg whites can be fussy. I used a recipe from this book, which is similar to this recipe on the internet. 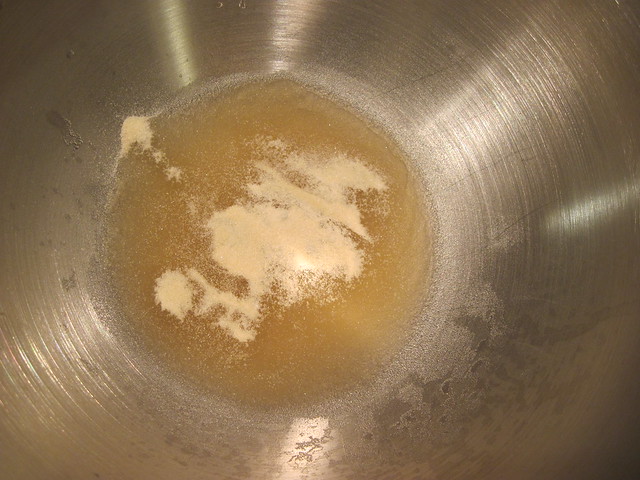 that is whipped with a hot sugar and corn syrup mixture. 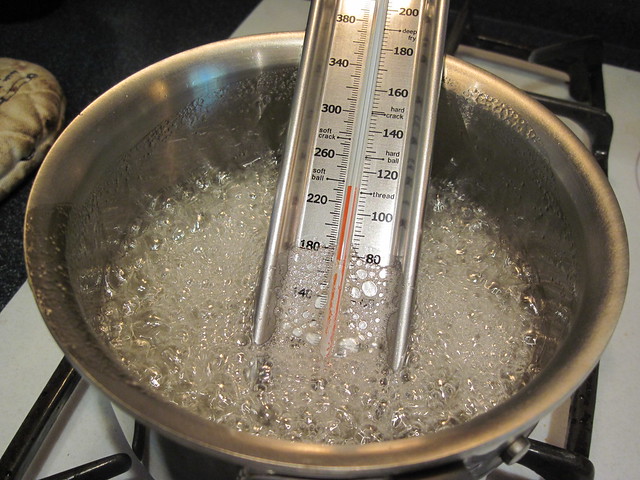 I was amazed at how fluffy and white they were with no egg whites in sight! You can add any flavor at the end of whipping. As it was our first try, we went with plain vanilla, though mint was very tempting. 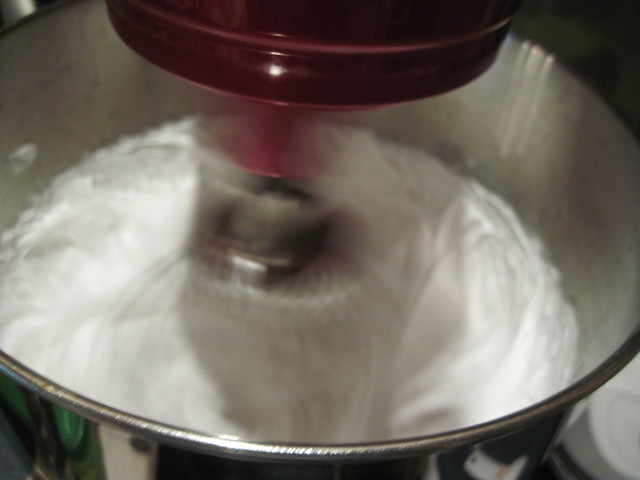 The mixture is turnout out into a foil lined and greased pan and spread out. 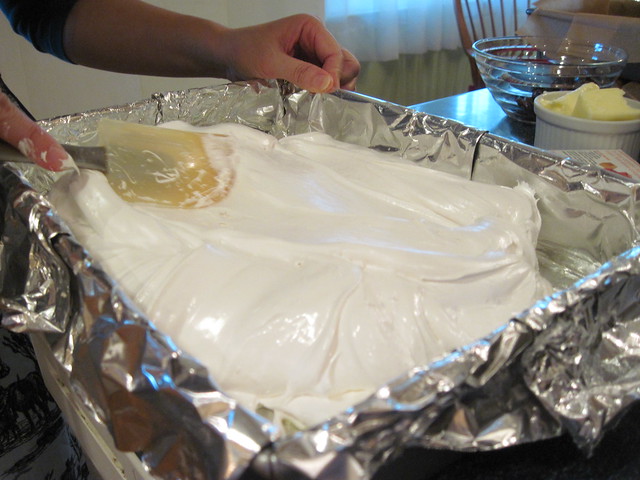 Then, you have to wait a day for them to set and dry out a bit before you cut them. 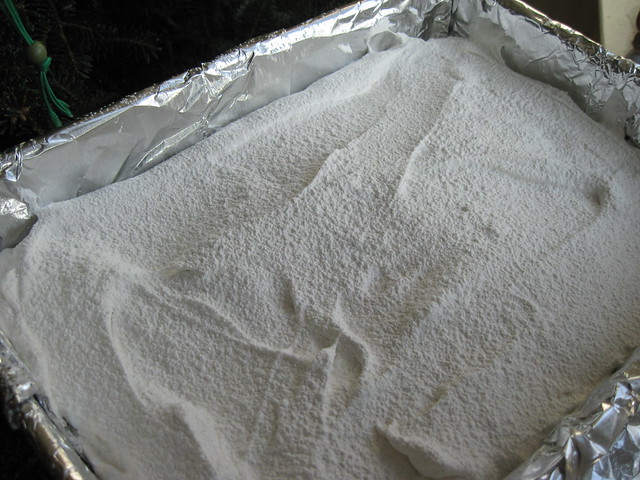 Again, my handy kitchen scissors came to the rescue. To keep the marshmallows from sticking together, they get tossed in a corn starch and powdered sugar mixture. 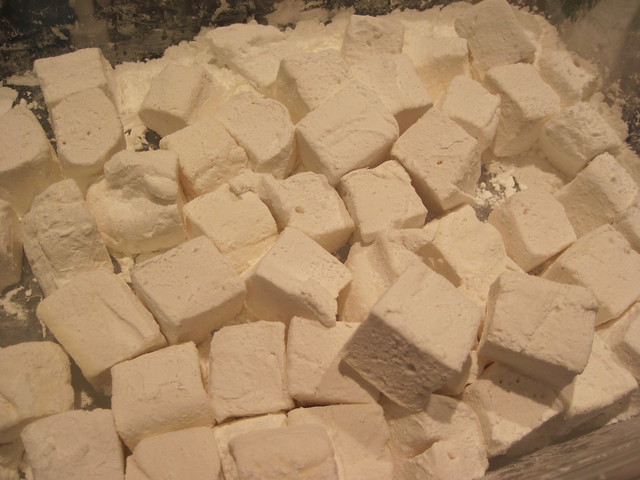 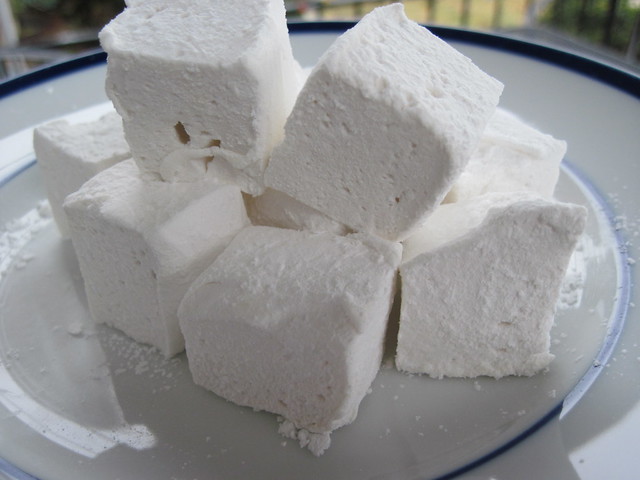 I usually think of marshmallows as a topping or something that needs to be melted and mixed with something or a candy that needs roasting. These ones, however, I am planning to eat plain and I have even considered hiding them away for my consumption only. However, I don’t really have to do that because they are not that hard to make. Plus, it’s Christmas, so I have to share. And I will! There is already a little bag of marshmallows waiting in the giveaway box, so leave a comment for a chance to win! Tell me, what is your favorite way to eat a marshmallow?

Brunch May Never be the Same

Brunch is our favorite meal.  I would say breakfast, but, really only one of us in this family is up early enough to actually cook a breakfast and he has yet to learn how to cook.  Well, he might be able to manage scrambled eggs, but french toast, bacon, and coffee?  Not yet.  We’ll work on that.  In the meantime, every Sunday, after we come home from church we make a nice big brunch.

We always have eggs in some form and a carb.  The carb varies from week to week depending on my mood.  Sometimes, we have pancakes or waffles, other times if we have leftover bread there will be french toast, and if I am feeling really lazy, I make toast. Occasionally, when in an ambitious mood, I will make some boiled potatoes the night before and we’ll have hash and biscuits.  The husband is in charge of the eggs and the meat, which is almost always bacon.  Until last week.

Last week, we made our own breakfast sausage.  Yes, yes, we did.

We had to make some space in the big freezer for a big order of beef from the butcher, so I dragged out a very large piece of pork that we had in there from our last order.

This unsmoked, raw ham was probably about 10 pounds, with the bone.  I had the husband cut it up into chunks (throwing the bone back in the freezer for stock later), which he added to a tray full of seasonings that I had already prepared.  In the mix was garlic, chopped sage, lots of grated ginger, and a lot of dried apples from our fall adventure.

All this went into our food grinder, which comes out probably only once every five years.  It was a bit messy and I was glad I had the foresight to wear an apron!

After about 45 minutes, it was all ground and I poured in some hard pear cider and mixed it up.  We cooked a little to make sure it tasted ok.  It was a bit salty and the flavors did not seem blended yet, but we were not worried.   Ok, maybe I was worried a little.   The mix was really lean because we had not added any extra fat.  I hoped that everything would mellow out and blend together nicely as it aged because  that was sure a LOT of work to go through to not have some awesome sausage at the end.  We had about 9 pounds of sausage when we were all done and everything got packed into freezer bags and stowed into the freezer.

Yesterday, we took out the first one and sliced it up.

Then, I pan fried them in a little oil.

It was good; a little on the salty side, but tasty.  The flavors had melded nicely with its rest in the freezer.  The ginger gives it kind of an asian flavor and the dried apples made it subtly sweet.  Because the meat was so lean, it did not have a trace of greasiness, and it was a little firmer than other sausages.  Still, for a first try at making our own sausage, we are pretty pleased with it.  Next time, I will try to add some pork belly to give it some more fat.  The husband mentioned that this would be really good in a stuffing/dressing for Thanksgiving.  I think he’s right, but I’m not sure we will have any left by then!

p.s.  I used the breakfast sausage recipe from the book Charcuterie by Michael Ruhlman.   I have had this book for awhile now and this is the first thing I have made with it.   I added the dried apples and substituted pear cider for the water called for in the recipe.

It Is Always Worth It to Try Something New

There are people who love to try new things and I am one of them.  I like variety, especially in my food.  When I was younger, I even disliked leftovers because it was the same thing I already had before ( I like leftovers a little more now that I have a larger family and leftovers means I can skip cooking a meal).

Thankfully, most of my family (except one who will remain unnamed, but those who know us will know who I’m talking about) is also game to try new things.  The only complaint I ever really get is from the husband.  He loves the variety, but sometimes the variety means that he doesn’t get the same meal twice, like ever.  Well, that’s not strictly true, but it is pretty rare for me to cook the same thing more than once in a month and sometimes it takes longer than that.

I just love to try new things and learn new things.  I am always reading new cookbooks and looking for new recipes to try.   As much as possible, I like to make my own stuff, even condiments like mayonnaise.  Usually, it just tastes better and it’s cheaper to boot.  I am especially enamoured with foods from around the world.  Not only does it keep our meals more interesting, I think it gives everyone an appreciation for the other cultures and foods of the world.  I haven’t met a cuisine I don’t like, though Ethiopian is Really Spicy, even more so than Korean, if that’s possible!

Sometimes, trying new things happens sort of by accident.  Last week, when our dear GF friend was coming over, I realized I had forgotten the corn tortillas that were supposed to go with our Mexican-inspired meal.  At the time, it was raining torrentially.  It was the kind of rain that makes you wonder if the house is going to float away.  There was no way I was going to the store.   I’d always heard that tortillas were not hard to make and I just happened to have a recipe from this book.

I decided to give it a try and this is how it went down:

First, making the dough was a cinch.  It’s just this special cornmeal you buy at the store called Maseca.  I just happened to have a bag of it, only because I had intended months ago to make tamales, but never got around to it.  You may have to go to a Mexican grocery to find it, but I have seen it at well-stocked stores.   To the cornmeal you add water, salt, and oil.  Easy.  Then, I let it rest.

After about an hour, we got the kids involved.  I rolled the dough into balls and put them between two squares of parchment.  I gave the boys a small, heavy frying pan  (I know!  I was worried, too, but I kept them on opposite sides of the table).  Then, I “showed” them how to flatten each ball into a round, flat tortilla.  I put the word “showed” in quotation marks, because I had no idea what I was doing-Ha!  I made the first couple and then they did the rest, with a little help from the husband and our friend.

ANYway, the boys developed their own technique pretty quickly.  The younger had the full body technique.

Watching the boys do this is reason alone to do this again.  It was Hilarious!

The last step is to put them on a frying pan for a few minutes.  I found it a little tricky at first because they kept cracking, especially when I flipped them, but once we started making them a little thicker, all went well.

The last ones that came of the pan looked the best.

And how did they taste?

They were Amazing.  They had a nice smooth texture and when they were warm, they almost felt fluffy.  They were nothing like their grocery store counterparts.   There was no grittiness or hardness and there was a subtle corn flavor.  They stayed soft for several hours, though they did have a tendency to crack when they were cold (but so do the grocery ones).

We had kind of a lot leftover because when I measured I accidentally put in twice the amount of salt.  You know what you have to do when that happens?  That’s right, double the recipe.

I might try to make my own tortilla chips next.