I love to give handmade gifts, especially the edible kind.  They don’t tend to take up a lot of space in people’s houses and the same thing can be given year after year and people are still happy to get them.  This may not be so true about many other things that people tend to give.

One of the most memorable edible gifts I ever got was a giant Hershey’s kiss.  I must have been only eight years old and a friend of my mother’s gave it to me.  It was especially precious to me because I think that might have been one of those years that my mother decided not to “do” Christmas.  Christmas didn’t mean anything to her, so there were many years that she grudgingly celebrated, if at all.  It made sense to her to be that way since she did not grow up celebrating Christmas, but it was challenging for me growing up in a place where everyone, even those who did not go to church, celebrated Christmas.  Most years, I put up the artificial tree by myself (which she really only bought under the influence of another friend who insisted that we needed to celebrate Christmas, if only for me; that Christmas was one of the good ones) and I spent many a Christmas morning watching all the various special Christmas programs on tv by myself.  It was just another day off for my mother, not a day to do anything special.  Because of those times, I think I really treasure this time of year and this freedom that I have as an adult to create traditions and celebrate freely in the ways that are meaningful to me.   It’s also why I love to give gifts. 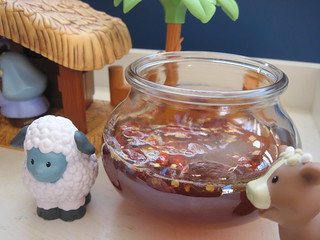 Unfortunately, today’s easy gift idea did not totally turn out the way I had hoped.  I got the idea for this Hot Honey on the internet, but now I can’t find the link–sorry!  It’s basically honey that is infused with chili papers to make it a little spicy.  It sounded like a great idea because anything sweet and spicy always sounds like a good idea to me, but those directions said to just mix together and steep for a week.  However, I am an impatient sort and I did not want to wait that long, so I went with another recipe that I found which involved heating the honey in a double boiler and cooking the mixture together for a bit. 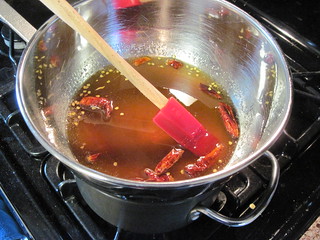 Well, I guess I didn’t add enough chili peppers because it does not have the kick that I was hoping it would have.  There is a little warmth, but barely noticeable.  Sometimes there was a little heat and sometimes there wasn’t.  The good news is that it didn’t stop anyone here from enjoying it on our biscuits, fried chicken, and waffles, so I guess it wasn’t too bad. 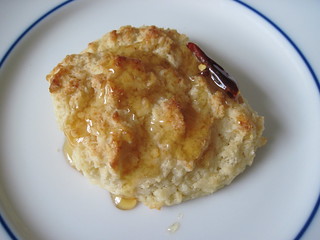 However, I recommend that if you make this, double the number of chilis I used.  There really is no set recipe here.  I used about 12 ounces of honey and five chinese chili peppers broken in half as well as a teaspoon of Szechuan peppercorns.  It spent about fifteen minutes cooking in the double boiler.  Next time, I would use double the amount of chilis.  Chilis vary in intensity, so it wouldn’t surprise me if that resulted in a super hot honey, ha!  If you get a good mix of flavors that you like, it would make a super gift. 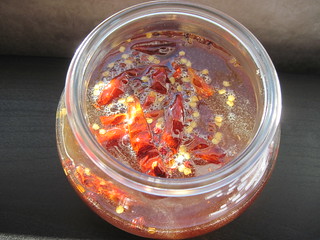 Unfortunately, I can’t include a sample in the fun gifts box for you to try.  I am afraid that the honey would spill out of the container, so you’ll have to try it yourself to have a taste.  Leave me a comment and tell me about how you like to spend your Christmas mornings.  We always open our stockings first thing and then have a nice breakfast of homemade bread and various other treats.  After we are well fed, we then open our gifts one at a time so we can really enjoy each one.  We play Christmas music and always have the Christmas pyramid lit up, which is my favorite Christmas decoration by far.

Me vs. the Honey

I don’t know if you have heard this, but I learned last year that consuming local (to you) honey can drastically reduce allergy symptoms.  I have suffered from seasonal allergies all my life and, fortunately for me, modern drugs takes care of most of my problems.  This, however is not the case for my oldest, who suffers so badly from seasonal allergies that he ends up spending most of each spring indoors with a box of tissues as his constant companion.  We have tried just about everything over the counter and prescription and nothing has worked satisfactorily.  So, when I heard about the honey thing, I went right away and bought the biggest jug of local honey that I could find.  Supposedly, the honey helps your body create antibodies to the pollen that is local to your area which acts to reduce your allergic reaction.

Unfortunately, I cannot really speak to the effectiveness of this treatment because over the winter, my nice jug of clear, liquid, honey turned into a brick of solid honey that I could not access.  See?

This picture was taken After the husband had added some water to try to loosen it up.  It was really a solid brick beforehand.  Really, there was no way of getting this stuff out.  The spout was too small to get any utensil in other than a chopstick and no amount of squeezing or shaking could move it.  The husband joked that the only way to get to the honey was to cut off the top of the jug with a light saber.  Ha!

This jug of honey and I have been eying each other for a long time.  I have actually been avoiding recipes that call for honey because I really could not get a drop out of that jug.  And to think I was overjoyed to find such a big jug!  It would be accurate to say that bitterness has been growing in my heart towards this honey.

I did some research and found that heat could loosen up the honey, but as soon as it cooled, it would be hard as a brick again.  Maybe I was being unreasonable, but I felt betrayed by my honey.  I mean, I was depending on it to help my child and it let me down when I really needed it.  Even if I could get some honey out, it would be grainy and hard.  Who wants to spread grainy honey on their toast?

Well, I will tell you now, I am not one to be done in by a jug of honey.   I decided to take care of that jug once and for all.  So, yesterday, I pulled out a recipe that called for a lot of honey (12 ounces) and I tripled it to use up the entire jug.  To get the honey out, I had to pour hot water in it and shake the jug.  Luckily, the recipe calls for water, so I just took the water it called for and poured it little by little into the jug until I got it all out.  After mixing up the batter and throwing it into the oven for about an hour, I had these.

It’s probably enough to last a lifetime…well, at least several months.  The good thing is, we love this bread.  It is basically a quick bread made with honey as its only sweetener and lots of spices.  It’s pretty low in fat and has some rye flour in it, which gives it a nice hearty texture.  It is really good spread with butter and eaten with a cup of tea. I am hoping that the health properties of the honey have not been compromised by baking it.  But, just in case, I am going to get some more local honey to drizzle on top of the bread.  This time, though, I think I’ll get a smaller jug.

If you want to make some of your own pain d’epices, you can find the recipe here.  It’s a pretty quick and easy recipe and easy to multiply.  The recipe calls for a 9 inch by 5 inch pan and I had 8.5 by 4.5.  There seemed to be a LOT of batter, so I made a mini loaf to go with each large pan.  It worked out well and I didn’t have to worry about the pans overflowing.