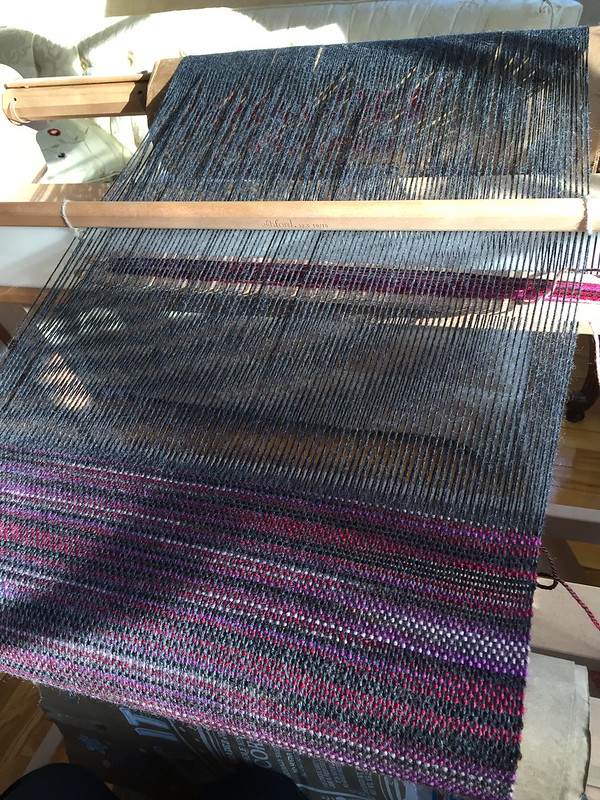 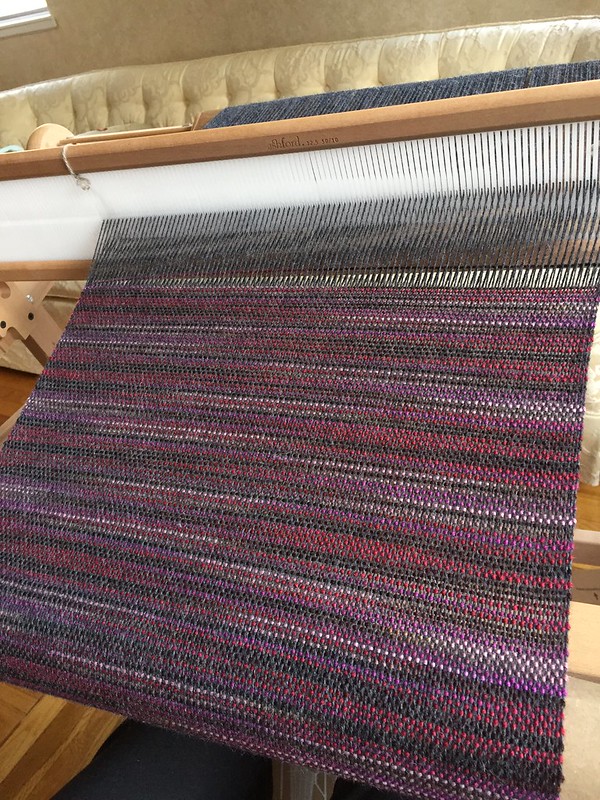 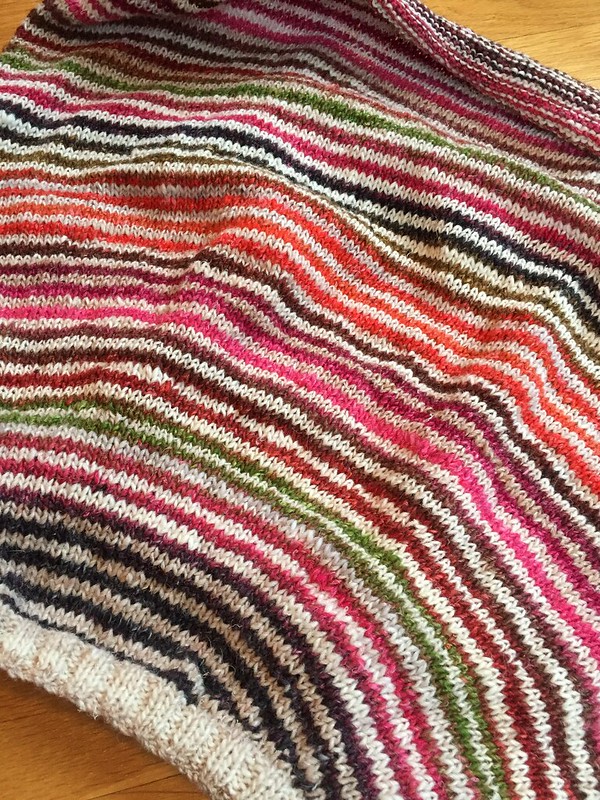 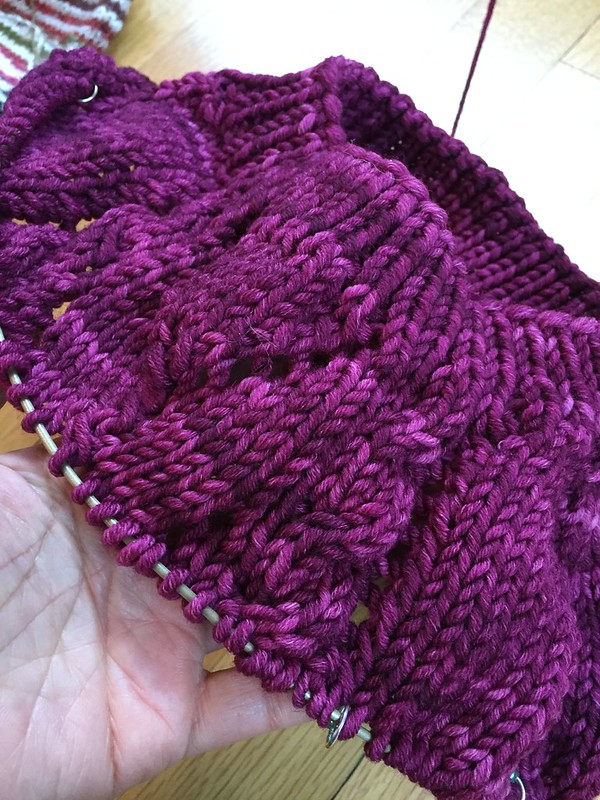 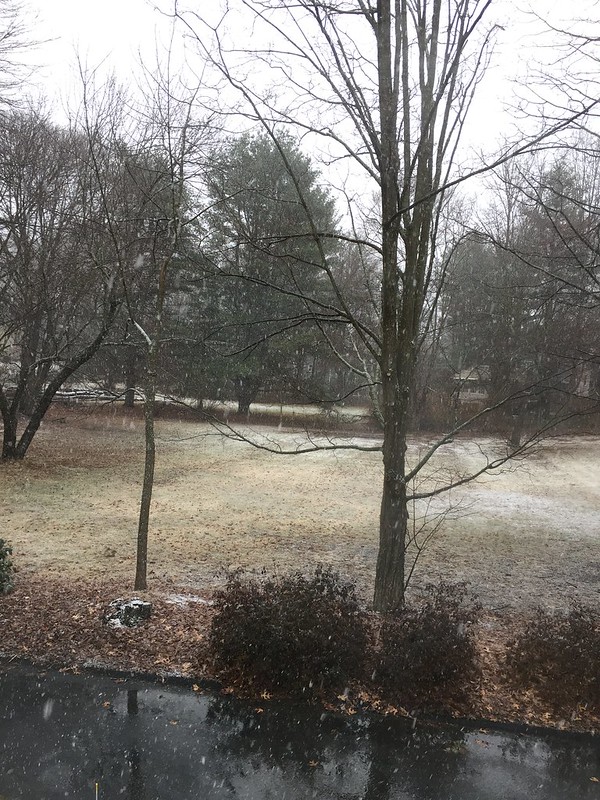 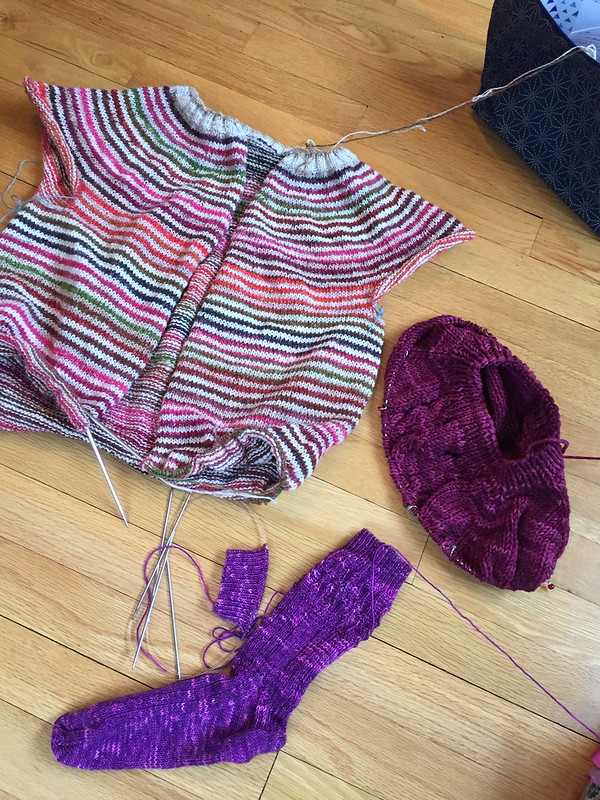 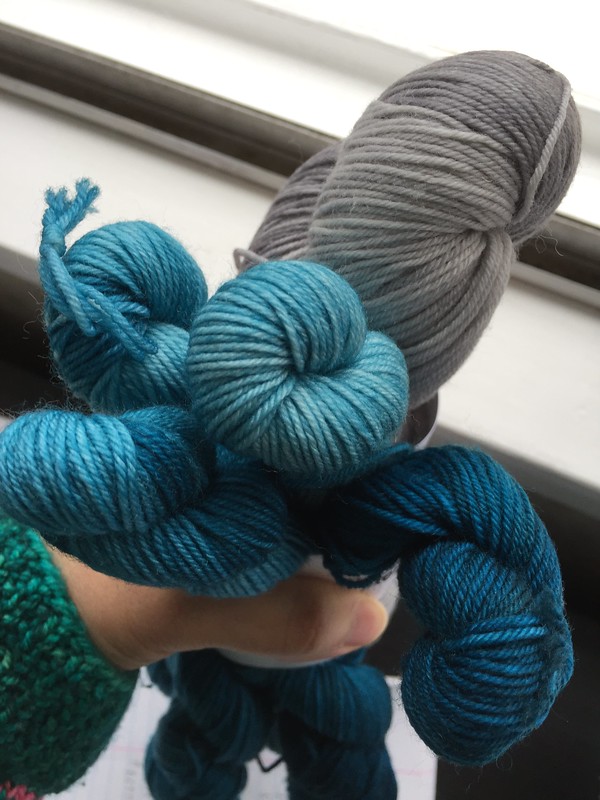 Happy New Year! I hope you had a nice holiday full of everything you love. Ours was lovely, full of good food, family time, time with friends, and lots of sleep. We really needed the sleep! After the major festivities on Christmas Day and Boxing Day, I really tried very hard to not do much. Before that, I was busy finishing up a couple of knitting gifts.

Slipper socks for the boys: 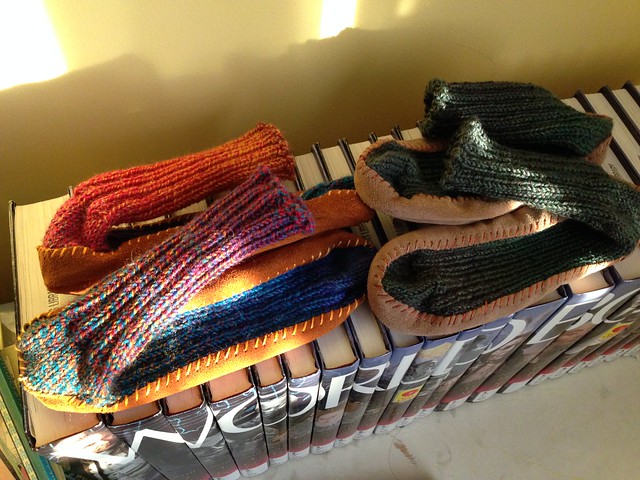 If they look a little loose, that’s on purpose. These boys are growing faster than my knitting can keep up with, so I have to make them bigger to make them last longer than five minutes. 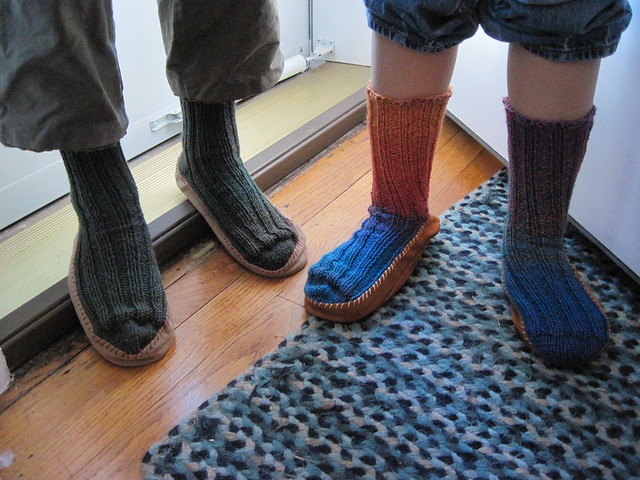 And a hat for the husband: 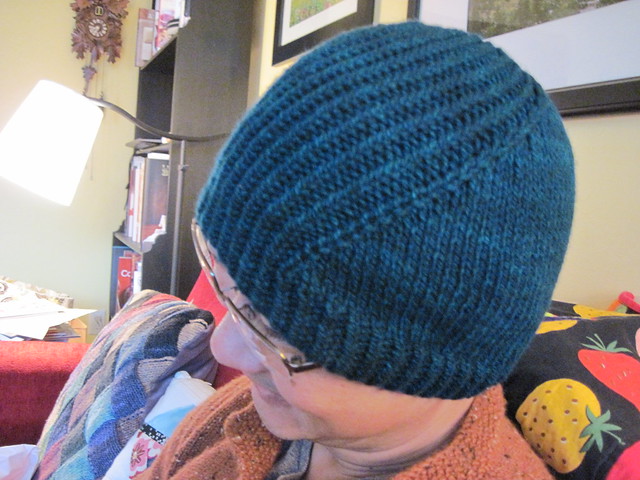 I hope you’ll forgive the blurry nature of Christmas morning photos! Anyway, soon after the holidays, my thumb suffered a minor injury and I was unable to knit for a few days. Good thing I had my loom to keep me busy! On New Year’s day, I warped a new project on the loom. It’s going to be a sampler blanket in worsted weight yarn. 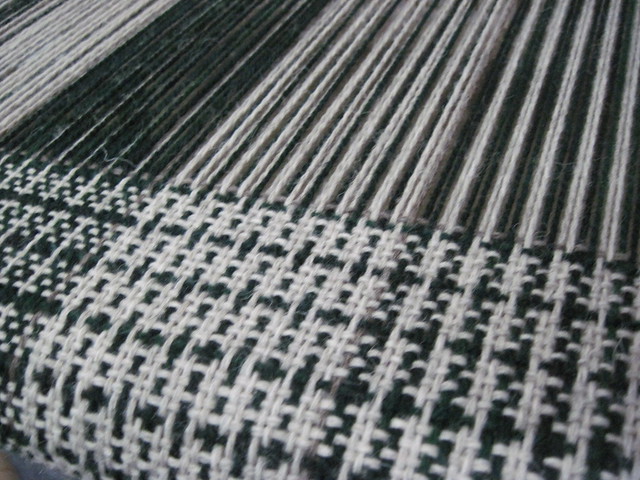 I know, I know, it’s another blurry photo! Our basement has terrible light. I’ll try to get a better one when I have more to show. It sure is going fast. I can probably weave about 4 inches in half an hour, maybe less. It helps that I want to see what kind of pattern comes up next, so I lose track of time.

My thumb is a bit better now, so I am back to knitting, though not as much as I would like. I have two sweaters on the needles that I can’t tell you about. They are both pretty heavy, so I had to cast on something little and light to work on when my hands are too tired. 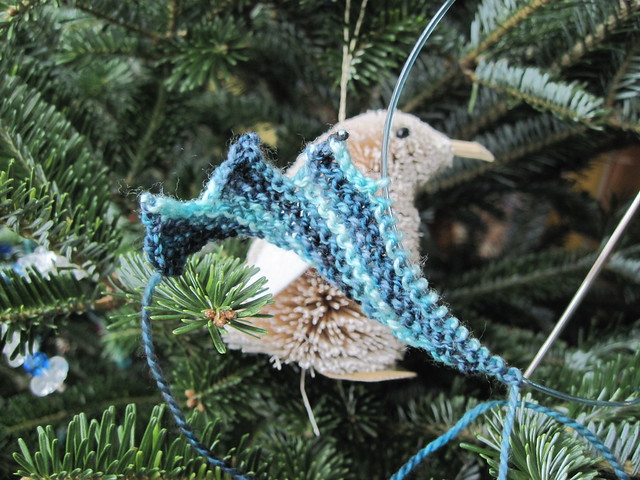 This is just the beginnings of a Hitchhiker shawl/scarf and it is just right for now when I want to knit, but can’t hold much weight.

I also have some sock yarn ready to wind and knit some new socks. My good friend, Kim Swingle, has just released a group of patterns called Playtime specifically for all the highly variegated sock yarn in your stash. The patterns are designed to minimize the pooling that these yarns are notorious for. I cannot wait to get started on some! 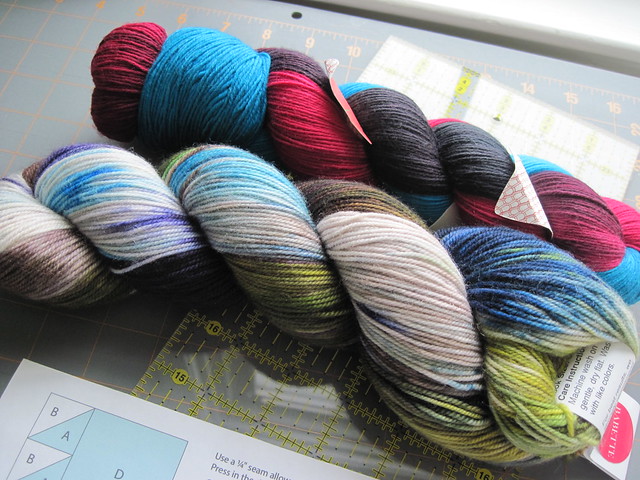 And for those times when my hands need a complete rest, I have these to keep me busy: 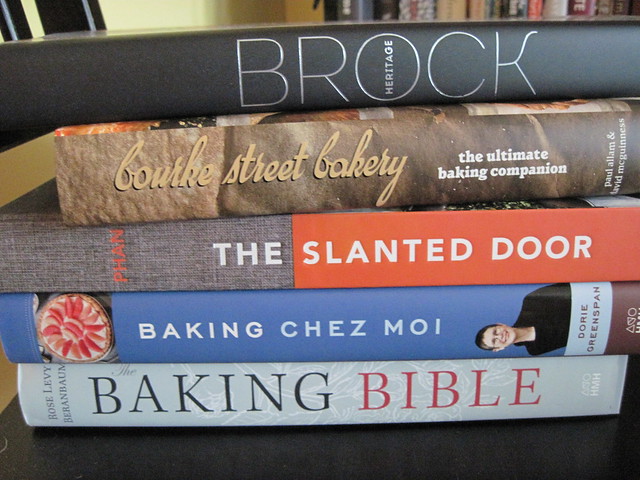 New cookbooks! There are lots of great new recipes in these pages. I can’t wait to get started!

Time for a Break

At the end of the last school year, I got a little frazzled around the edges.  There was a loooong stretch of school between the winter holidays and Easter break.  This year, I’ve decided to try out a different schedule.  Not really a year-round school schedule, but one in which we take breaks for a week every six weeks or so.  This week has been our “week off” and I am really glad I decided to do this.

Now, this doesn’t mean we do Nothing.  Heaven forbid that Nothing gets done in this house!  Ha!

Actually, the boys have been doing a few little independent work type things and we’ve done a couple of fun projects to prep us further for Williamsburg this weekend.

On Monday, we made butter.  It was more fun than we expected, especially when the bottom of one of the jars fell out.  There was cream everywhere and I am so sad I didn’t get a picture to show you.  I was just getting ready to take a picture when it happened and then my housey instincts kicked in and I put the camera down to Clean It Up.  Oh well.  It was still a great time, even with a greasy floor and the boys now having to share a jar. 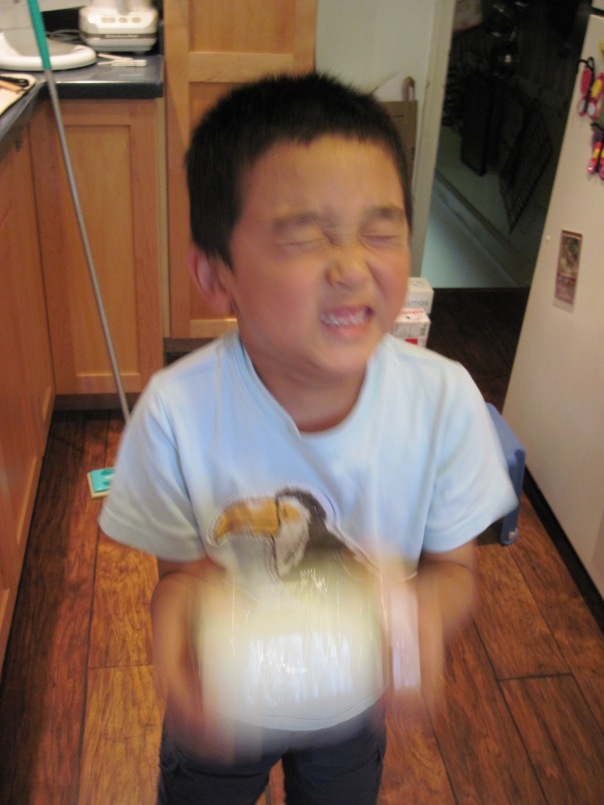 See, doesn’t it look fun?  We put five marbles in a pint jar with about 1/2 cup of cream.  Amazingly, we discovered that before it turns into butter, there’s whipped cream!  No more getting out the mixer for whipped cream in this house!  We’re going to use a jar and kid power from now on.  Anyhow, there was a lot of butter at the end of it.  I was really impressed. 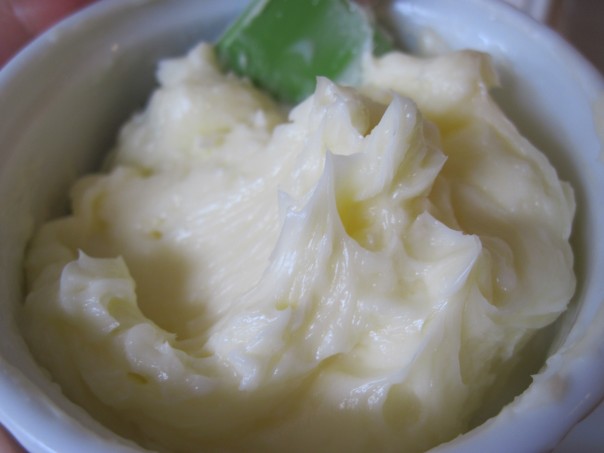 The boys also finished these and I have to say, I think they look terrific. 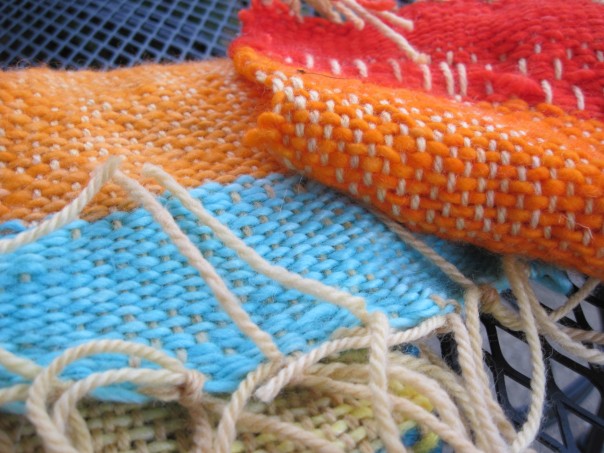 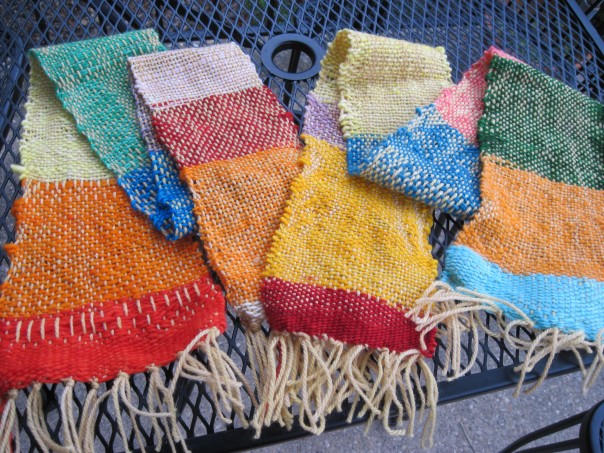 The boys are really proud of their work and they should be.  Even with the mistakes they made and the unevenness, it was something crafted by them.  And there were a lot of good lessons learned, too.  Among them, patience, looking at details, and even some color theory.

It was a great project to do and very practical too.  As my oldest said, “I made it with my own hands.”  And, isn’t that the essence of why we craft?

Cardboard to the Rescue

Well, actually quite a lot.  We take cardboard for granted, I think.  Every time we go to the store, we bring home loads of cardboard–even more if you go to a warehouse store.  You would think that if you buy in bulk, you would be saving on packaging materials, but have you seen the kind of cardboard that cereal comes in from Costco?  It’s amazing.  I think you could sit on it and your cornflakes would still be safe.

I bet almost everything we have has been in a cardboard box at some time or another.  Then, once you’re done using a cardboard box as a storage device, cardboard continues to be useful–as a tool, a toy, a cushion, an art project, and even as mulch for the garden.  We save lots of cardboard boxes.  You just never know when they will come in handy.

This week, I took this cardboard box (I highly recommend this vacuum, by the way, but maybe I’ll talk about it in another post) 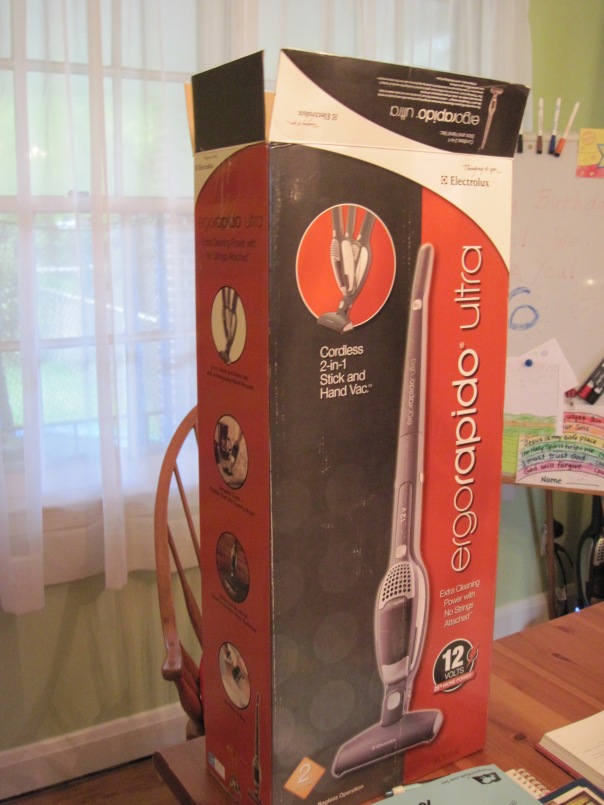 and I cut it up into pieces.  Well, really, I just wanted two long pieces, one each for the boys.  I cut some notches in one end of each piece 1/4 inch apart for 9 inches.  See? 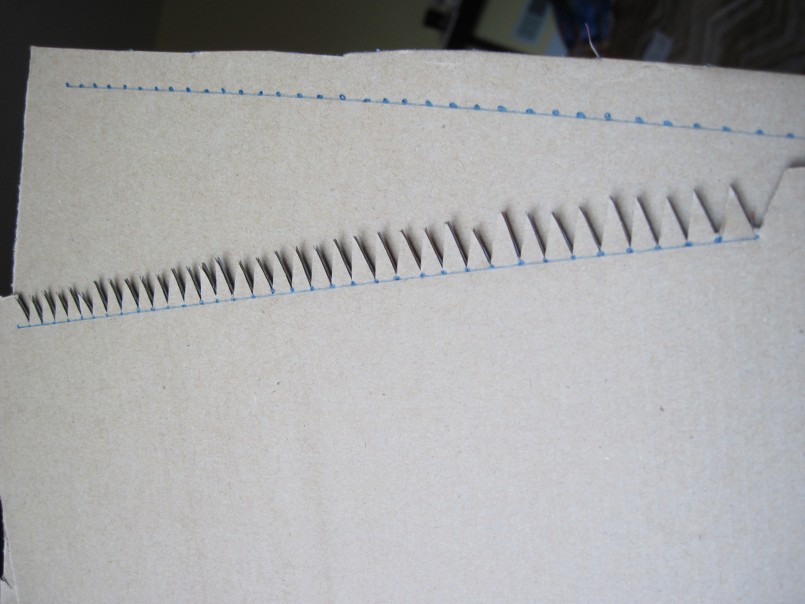 Then, I took the yarn we had dyed last week and wound it around the length of the cardboard, wrapping it around the notches when I came to them.  Lastly, I added a few pieces of tape.  Do you know what it is? 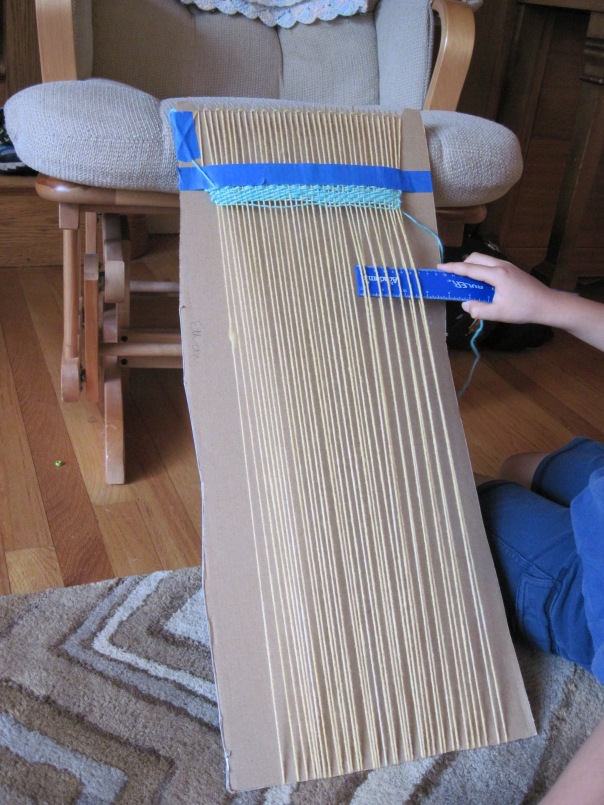 That’s right, it’s a loom.  I dug out some yarn that we had dyed a few years ago with kool-aid.  The boys picked out a color and I taped an end to a ruler.  Then, they started weaving.

It was a bit of a slow start at first and they made a few mistakes, but hopefully they will get the hang of it.   After watching them struggle a little, I added another piece of cardboard to cut their work in half. 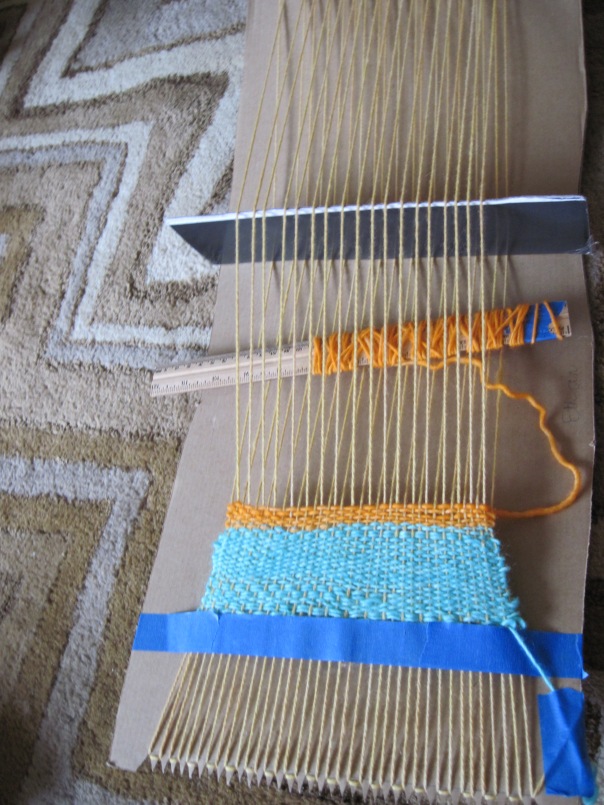 Now, on every other row, they can just lift the little cardboard piece and slide the ruler right through.  It’s going to be tricky going around the end of the cardboard, so we’ll see what happens then.  Here’s one last picture of both looms together. 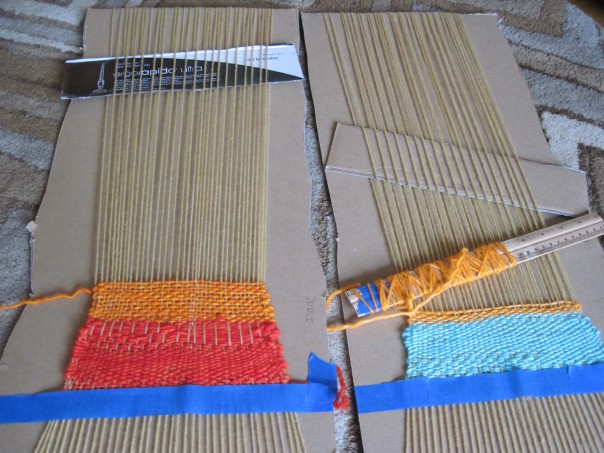 See, isn’t cardboard useful?  I’m happy that I didn’t have to go out and spend oodles of money on a loom (and so is the husband) for the kids.  Now, I can use that money for more yarn or fabric!  Yay for cardboard!

Do you have a favorite use for cardboard?

p.s.  I did get this idea from the Colonial Days book I mentioned last time, but I kinda expanded it a little.  The project in the book was just a little potholder.  We have enough of those in the house.  Plus, I may be an over-achiever.